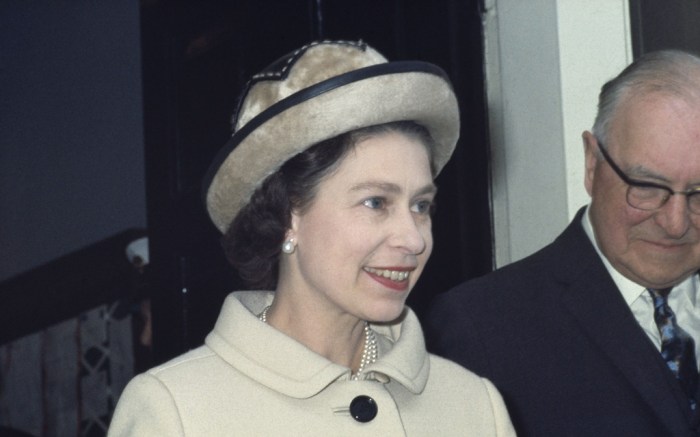 Her coronation took place on June 2, 1953 at London’s historic Westminster Abbey. At just 25 years old, the royal rose to the throne 16 months after the death of her father, King George VI, on Feb. 6, 1952.

However, much of her style preferences were formed in the 1960s, when the queen’s color-coordinated outfits and sleek pumps made a stylish statement even in her earliest years.

In the ’60s, the queen often sported white pumps — a style which has come back in fashion in 2017. Clad in outfits not dissimilar than those donned by ’60s style icons like Jackie Kennedy, Queen Elizabeth II stepped out in chic knee-length dresses and overcoats.

The queen often opted for pumps with bow detailing for a little extra flair, ensuring that she was well-dressed for appearances across the globe.

In addition to her chic heels, the queen also sported classic wellies — a staple of British style — for outdoor expeditions throughout the 1960s.

For more formal appearances, the queen sported full-length gowns throughout the ’60s, often opting for some sparkle. The queen mostly coordinated her shoes’ colorway to that of her gown — sometimes choosing sandals over pumps.

While it sometimes can be difficult to picture her as anyone but the silver-haired monarch we know today, the queen once was a young royal who was thrust to the throne in 1952 after the unexpected death of her father, George VI. Netflix’s show, “The Crown,” aims to highlight the queen’s ascent to power, and in doing so, it also provides a glimpse into the style the queen wore in years past. The season 2 premiere is available to stream now.

Of course, the queen’s uniform today — she almost always wears a bright coat with a color-coordinated hat and black heels — doesn’t differ all that much from her style of years’ past.

Click through the gallery to see more images of the queen in the 1960s.