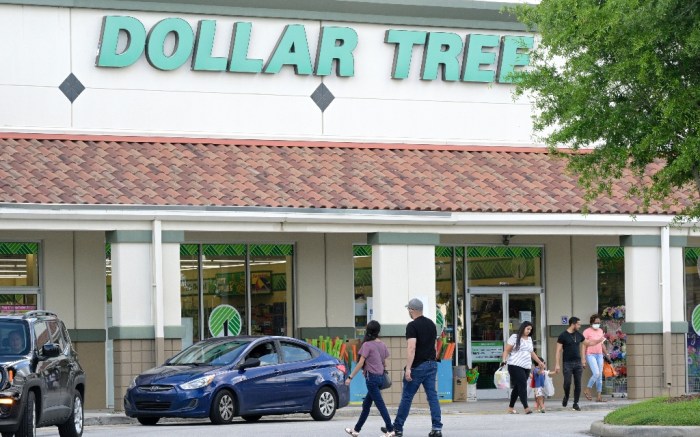 Though past videos have been made about how to create recipes, makeup looks and more using Dollar Tree or dollar store products, the chains are getting a new twist from videos by user Yolanda Jone, who shared her own experience. The social media star, through her ongoing “Hood vs. Hood” video series, in which she compares the differences between retailers, has gone viral for her reviews of Dollar Tree stores in different neighborhoods — simultaneously providing insight on how their conditions and product selections vary by neighborhood wealth.

After driving 35 minutes away from her hometown to what she referred to as a “rich” neighborhood in her first video, the TikToker announces one large difference: this Dollar Tree, compared to her local store, has products attractively displayed on the sidewalk. As Jones points out and shows her viewers, this Dollar Tree location is fully stocked and also features name brand products like Oreo and Chips Ahoy! cookies, as well as Hostess cakes — plus more delicate fare, like crumbled feta cheese. The clip has racked over 6 million views so far since publication on April 15.

“I was so overwhelmed with the difference of the Dollar Tree,” Jones states at the end of the clip. “They was so stocked up, they had so much stuff that I didn’t even buy anything. All I can say is, that’s a damn shame.”

In her second and third subsequent videos, Jones visits another Dollar Tree that, compared to the first she viewed, is deemed a “shock to her system.” The star’s camera depicts disorganized or empty shelves, merchandise strewn across the floor, open refrigerators for frozen food and piles of shipping containers.

“I was so freaking disgusted in there that I just walked out,” she concludes in the third clip.

Jones’ videos have seemingly gone viral from their depiction of how wealth inequality can affect numerous parts of someone’s life — even the quality of retail establishments they frequent.

However, this isn’t the only Dollar Tree news to make the rounds this season. Last week, a Dollar Tree location in Indiana went viral after its manager posted a controversial Help Wanted sign saying the store will only employ “Baby Boomers.” The sign was reportedly posted outside a Dollar Tree in Bremen, Indiana, by the disgruntled manager after two young employees quit their positions.

Last year, Dollar Tree additionally made headlines for its price increases, raising numerous products’ prices to $1.25 due to inflation.