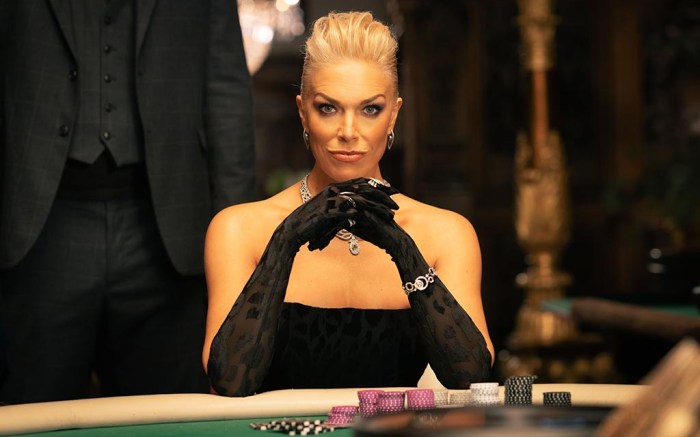 Rakuten, one of the leading shopping platform that offers cash back rewards, will air its first Super Bowl ad on Sunday. Set against the backdrop of an opulent poker game, the commercial stars Emmy Award-winning actress, Hannah Waddingham and features a cameo from The World’s First Podcast hosts, Erin and Sara Foster, whose clothing brand Favorite Daughter is currently available to shop and earn cash back on Rakuten. The ad was shot at the iconic Hatfield House near London, which has been home to acclaimed films like “Batman” and “Charlie and the Chocolate Factory.”

The ad, “High Stakes,” finds cunning high-roller Waddingham at the head of a long poker table as she continues to raise the stakes against another woman in what appears to be the final hand. In the quick clip, the “Ted Lasso” starlet looks luxe while giving an evil glare in a strapless black gown, long black gloves and sparkling jewels. Unable to match her opponent’s bet, Waddingham storms off in a fit of angry glamour as a hairless cat slides across the table on a robo-vac. The cinematic spot hopes to inspire shoppers to win big by earning Cash Back with Rakuten.

Waddingham stated that she enjoyed filming with the online retailer because it allowed her to channel the personality of a villain. “I’m so grateful for the memorable experience of filming my first Super Bowl commercial with Rakuten, especially since it’s their first Super Bowl ad,” Waddingham explained. “Portraying a mischievous character allowed me to take on the kind of role I love to play – one with a bit of sass and a devious laugh. I also love that this spot shows everyone can feel like a winner when they shop with Rakuten. Who doesn’t love the satisfaction of a good deal?”

Stay tuned to FN for more updates on the Super Bowl and all the excitement on Super Bowl Sunday, when all eyes will be on the Los Angeles Rams and Cincinnati Bengals.