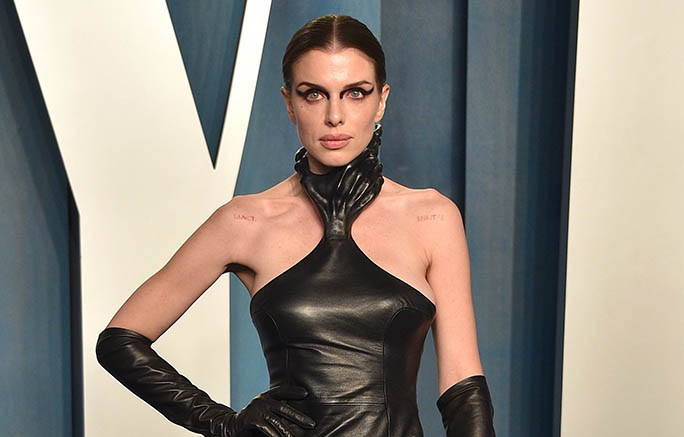 Starring a slew of skaters and creatives, the campaign finds Fox as a flight attendant on a journey that’s nothing short of a party in the sky. The actress’ passengers include Tyshawn Jones, Tenzin Che Miyahira, Caleb Barnett and Sean Pablo, among others — including a massive teddy bear. For the occasion, the “Screenshot” actress wears a navy blue minidress with wide sleeve straps atop an unbuttoned striped blouse. Completing her look is a matching flight attendant cap, plus sheer black stockings, a lacy red bra and sparkling diamond bracelet.

In one shot, the actress even joins in the party, perched on Jones’ lap as guests snooze and chat while dressed in Supreme’s latest collection by James Jebbia.

“Maybe, like, alcohol?” Fox suggests as a refreshment, pouring Hennessy for passengers in a clip on Instagram. “Do you want some?”

Slick pumps like Fox’s are a versatile style that’s earned its spot in wardrobes worldwide, due to triangular toes and stiletto heels that sharpen any ensemble. New styles from brands like Sam Edelman, Ted Baker and Calvin Klein have also been released to high acclaim over the years in a variety of heights and finishes. In recent weeks, stars like Lady Gaga, Meghan Markle and Diane Kruger have also slipped on Jimmy Choo, Manolo Blahnik and The Attico heels as well.

Fox has worn a variety of sleek dresses and catsuits on past red carpets, hailing from Wang, Dior and Jean Paul Gaultier. The “No Sudden Moves” actress‘ formal footwear has also included pointed-toe pumps by Christian Louboutin, Giuseppe Zanotti and Manolo Blahnik. In recent weeks, Fox has become a rising star in the fashion world, attending Diesel and Versace shows during Fashion Month and making her runway debut in LaQuan Smith’s Fall 2022 fashion show.