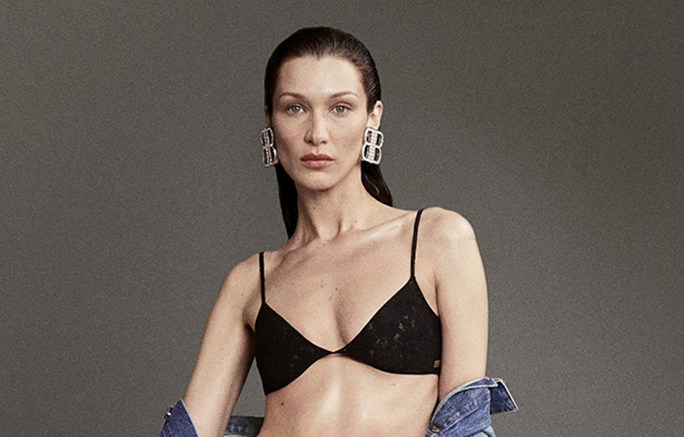 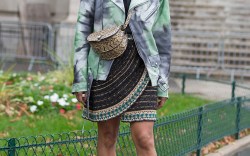 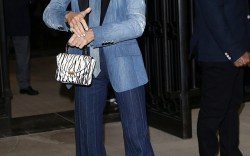 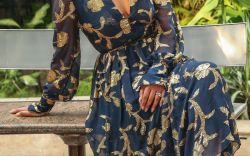 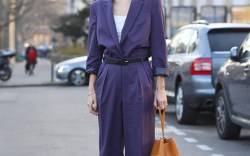 Balenciaga’s fall 2022 campaign picks up where its presentation, “The Lost Tape,” left off by creating still and moving images inspired by another era for today. Bella Hadid stars in the first installment of the multi-series campaign. The new generation supermodel joins iconic French musician Aya Nakamura in a series of images captured by Nadia Lee Cohen. Shot on a seamless backdrop, their poses reference the provocative nature of the early 1990s.

Hadid brought her edgy street style sense to the French label’s new campaign, modeling baggy separates with metal accessories. Two photos show the 25-year-old influencer posing in a pair of wide-leg leather trousers. The statement bottoms had a thigh-high side slit and were held up by a thick black belt. She slicked her signature brunette tresses back, which helped to place emphasis on her oversized silver cuff earrings, thick choker and shoulder bag.

In another image, the media personality gives her black bralette and matching bottoms a slick finish with a denim jacket that she draped over her shoulders. Completing her ensemble was loose-fitting jeans, Balenciaga’s BB earrings and the brand’s popular Le Cagole bag. Her pants gave a peek at her footwear choice, which appeared to be a pointy patent leather silhouette.

It is no wonder that Hadid is the face of Balenciaga, seeing as though she has ruled the street style universe for the past few years. She is snapped daily in eye-catching ensembles that not only push forward major trends, but also set them, too. Along with Balenciaga, Hadid has also starred in campaigns for Calvin Klein, Ralph Lauren, Fendi, Versace, DKNY and Max Mara.

Click through the gallery to see Bella Hadid’s street style evolution over the years.