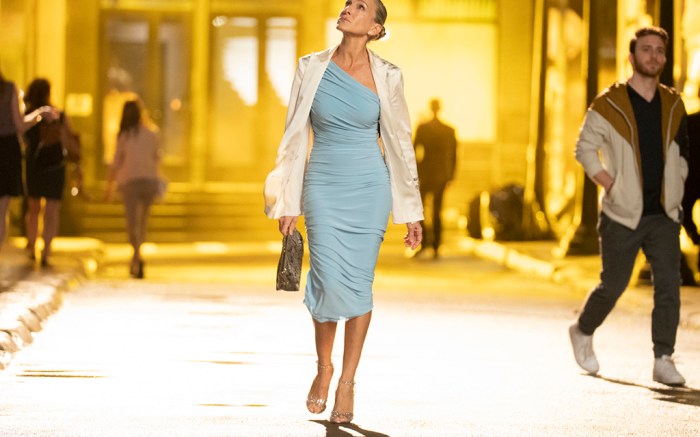 And just like that, Carrie Bradshaw and co. are the subjects of a new documentary.

“And Just Like That…,” the hit “Sex and the City” companion series, will be the subject of its own HBO Max documentary this month. As announced on Instagram, the “‘And Just Like That…’ The Documentary” will premiere Thursday, Feb. 3 on the platform—coinciding with the show’s season 1 finale. The documentary will take viewers behind the scenes of the show’s debut season, from its writing to the fashion.

Indeed, the show’s costumes have been a major talking point since it began filming in New York City last summer. From footwear to clothes—including Bradshaw (Sarah Jessica Parker)’s iconic Manolo Blahnik Hangisi pumps—viewers have frequently tuned in to discuss the outfits worn by castmates Parker, Kristin Davis and Cynthia Nixon during its duration. However, in addition to extravagant style, the new documentary will cover a range of other topics as well.

Below, discover everything you need to know about “‘And Just Like That…’ The Documentary” before the premiere tomorrow.

What is the ‘And Just Like That’ documentary about?

“‘And Just Like That…’ The Documentary” will at least cover “And Just Like That…” from its very first day of shooting until the show wrapped and held its premiere in New York City. From dressing the show’s characters to bloopers caught behind-the-scenes, the film will also include numerous moments not previously seen on-camera. “Even 23 years in, I’m excited. Terrified and excited,” Parker said while filming in the documentary’s trailer.

When will the documentary come out?

The documentary will begin streaming on HBO Max on Feb. 3, 2022. Though there’s no word on exact times, the film will likely launch near or after the finale’s 3 a.m. ET launch.

How to watch the “And Just Like That…” documentary

You can watch “‘And Just Like That…’ The Documentary” on HBO Max, which can be streamed on television, computers or mobile devices. The platform features a range of subscriptions, starting at $10/month.

A potential season 2 of “And Just Like That…” is not confirmed at this time. However, with the show’s Instagram teasing this week’s episode as a season finale—not a series finale—fans couldn’t help but wonder: is season 2 on the way? After all, the show’s December 2021 debut made it the highest HBO Max debut since the platform launched in May 2020—usurping the   network’s previously reigning “Gossip Girl” reboot.

Why Is Kim Cattrall Not In ‘And Just Like That’?

“And Just Like That…” features the lives of New Yorkers Carrie Bradshaw, Charlotte York and Miranda Hobbes in their 50s, covering topics ranging from aging to personal identity. The show’s notable absence is Samantha Jones (Kim Cattrall), Bradshaw’s publicist BFF who—as covered in the premiere—left New York for London. Fans have theorized that, as Jones’ new storyline was left open-ended, it still gives Cattrall the opportunity to potentially return in the future.

Cattrall previously stated in a 2017 Piers Morgan interview that she isn’t returning to her iconic role. “It’s a great part. I played it past the finish line and then some and I loved it and another actress should play it, maybe they could make it an African American Samantha Jones or a Hispanic Samantha Jones?” Cattrall said at the time. “Or bring in another character. It can be another character. This is what I really believe that this franchise needs another point of view and this could be it.”

“Getting to know our new cast members has just been a gift, and we all have something new brought to us by them,” Davis states in “‘And Just Like That…’ The Documentary.”