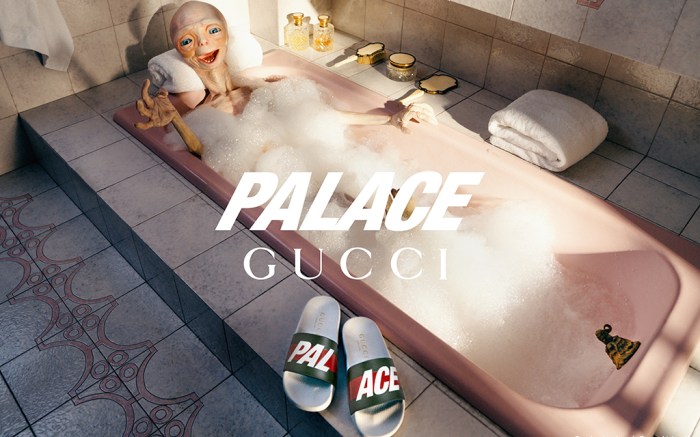 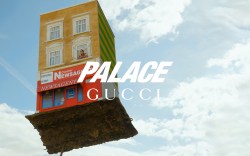 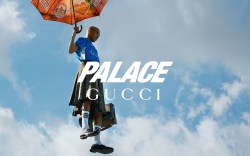 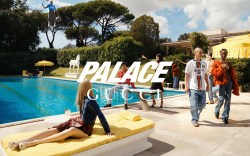 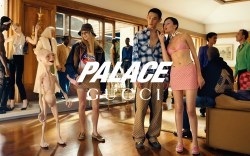 For this collection, the Italian luxury house said in a statement that creative director Alessandro Michele was largely inspired by Palace’s own back-catalogue and its “cross-generational influence” on youth culture. The collection focuses on the street – a place of fascination for Michele – where fashion “comes alive,” Gucci added.

Ultimately, Michele teamed up with Palace co-founders Lev Tanju and Gareth Skewis for a collection of clothing and accessories for all genders – including the British brand’s debut women’s ready-to-wear designs.

The logo-heavy collection fuses the double-G of Gucci with Palace’s Tri-Ferg triangle across the range, which includes a shearling jacket, a two-piece motorbike suit, soccer tees, denim, tracksuits and shoes. This cross-branding can be seen in the Gucci Horsebit loafer – a staple of a 2000s club uniform – which is reinvented in this capsule with the addition of a Palace “P” charm.

A co-branded Palace and Gucci safe is also part of the offering, produced by Conforti and available in 10 items globally; it nods to Gucci’s travel trunks.

This collection will drop online on Oct. 21 exclusively on Gucci Vault, the Italian label’s experimental online space launched in 2021 that’s dedicated to vintage, curation of designer items and special drops.

For the first time since its inception, Vault will also be taken offline and in real life, assuming physical form through pop-up stores in Paris, Milan, Tokyo, Osaka, and Bangkok, as well as take overs of Palace stores in London, New York, Los Angeles and Tokyo, the first time the brand has ever allowed another creative to reconfigure these locations.

Gucci’s new tie-up with Palace is the latest collaboration in the Italian label’s recent history of must-have partnerships. In June, Gucci released its much-anticipated collection with Adidas, which was first revealed at Gucci’s “Exquisite” fall/winter 2022 show in Milan in February. The collection helped Gucci reclaim the title of “world’s hottest brand” after nine months of Balenciaga topping the ranking, according to the Lyst Index’s second quarter 2022 report in July.

Gucci has also had recent capsules with Balenciaga as part of its “don’t call it a collab” Hacker Project, and has seen multiple drops of its on-going partnership with The North Face.