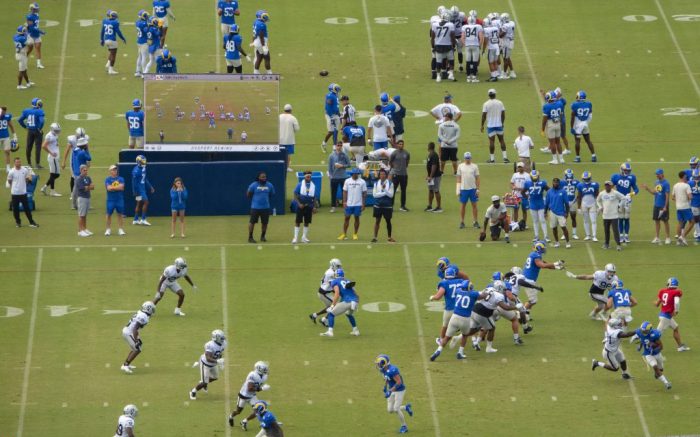 The Super Bowl LVI is upon us — and this year, the chosen uniform colors are looking a little different.

Traditionally, the home team wears their team colors on the field, while traveling teams wear white. However, at this year’s game at SoFi Stadium in Los Angeles on Feb. 13, the roles have been reversed for the Los Angeles Rams and Cincinnati Bengals. Instead, the Bengals will be wearing black tops with white bottoms, while the Rams will be wearing white jerseys and yellow bottoms.

The choices relating to color changed this year, due to the Bengals being the home team. As such, they were able to choose their uniforms for the Super Bowl first between the two teams. In this situation, the opposing team — the Rams — had to choose contrasting colors for their uniforms second. However, each uniform is more distinctive than just black and white. The Bengals’ uniforms feature bright orange tiger stripes on their jerseys and pants, as well as bright orange socks.

Talk about a glow-up. If you know, you know…#RuleItAll | #SuperBowl pic.twitter.com/Xf8zwRw8J5

Similarly, the Rams’ jerseys will feature blue lettering and accents throughout. However, their white uniforms surely contrast the Bengals’ black ones — and could be in their favor, as teams in white jerseys have a historic track record of winning Super Bowl games.

We’re in LA, you know we had to bring the heat for #SBLVI. 🔥 pic.twitter.com/wvwfIWHL1f

Previously, the New England Patriots wore white uniforms in 2005 when they defeated the Philadelphia Eagles in Super Bowl XXXIX; in 2015, when New England scored a come-from-behind victory over the Seattle Seahawks at Super Bowl XLIX; and in 2017, when the Pats beat the Atlanta Falcons in an epic comeback at Super Bowl LI. Unfortunately, the Pats lost to the Eagles at 2018’s Super Bowl LII, even though they were wearing historically odds-on whites. In 1997, white jerseys also failed the team, when the Green Bay Packers beat New England at Super Bowl XXXI.

Oh by the way…

🗣 WE WEARING THROWBACKS AT THE SUPER BOWL! pic.twitter.com/MfHN6W0k4T

In this case, the Rams got the first pick for the Super Bowl uniform after defeating the New Orleans Saints in the NFC championship game and opted to wear throwback jerseys.

So, when the Rams take the field in their white uniforms, the odds are evidently in their favor to some. But don’t place your bets just yet.