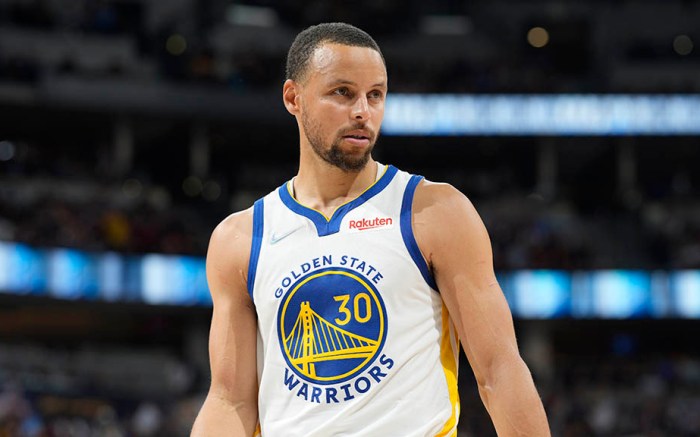 Steph Curry may be somewhat of a basketball wizard, but the star player can also work some enviable style magic while off the court. Case in point: Yesterday, the 34-year-old Golden State Warriors point guard practically strutted the tunnel to Game 5 of the playoff series against the Denver Nuggets wearing a seriously “fresh” look. Curry looked poised to clinch the series in an impeccably-tailored neoprene tracksuit — and, spoiler alert, he did just that.

Styled by Sherri McMullen, Curry donned a teal tracksuit jacket by his go-to brand Rich Fresh, which featured thick white, gray, and black angled stripes across the neoprene zip-up top. Wearing the track jacket open, the NBA star slipped on a black tee underneath, a simple silver chain hanging from his neck. The basketball star wore tapered track pants in black, which featured a black paneled stripe down the side in a contrasting material.

For kicks, the Under Armour athlete wore simple white sneakers to match the white stripe and zipper detail on his track jacket. Curry carried a simple black bag to tote his pre-game essentials.

On his wrist, Curry wore a black Tally & Twine watch to count the minutes before the big game. And all that anticipation (and tunnel power-dressing) certainly paid off. Curry lead the Golden State Warriors to a playoff series victory, defeating the Denver Nuggets 102-98. The win marked a stellar 4-1 series win for Curry and the Warriors.

Up until recently, Curry had been sidelined while recovering from a sprained ligament in his left foot and a bone bruise. But he returned to the court in short sprints during Game One against the Nuggets, working up to leading the charge against the Colorado-based team in the rest of the series.

See more of Steph Curry’s style through the years.