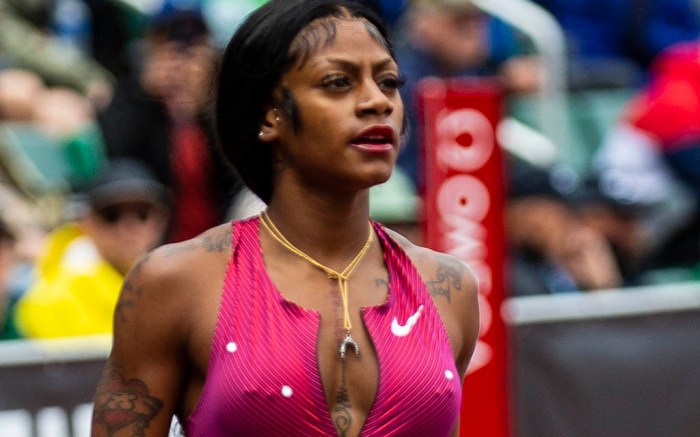 Sha’Carri Richardson returned to the race track with a triumphant victory this week.

On Sunday, the U.S. sprinter won the 200 meter run at Icahn Stadium during the New York City Grand Prix, with a time of 22.38 seconds. The victory followed Richardson’s earlier placement of second in the 100 meter run that same day, with a time of 10.85 seconds. Both came after Richardson was dropped from Team U.S.A. at the relay and 100-meter race in the Tokyo Olympics, and suspended for one month, after testing positive for marijuana use last summer.

For her newest wins, Richardson wore vibrant red fishnets across her arms and legs. The sleek cover-ups were layered under the event’s standard deep pink striped running leotard, which featured short bottoms and a sleeveless silhouette. Adding a burst of texture to her look was a gold cross and crown pendant necklaces and layered gold earrings, as well a sparkling crystal appliqués on her forehead.

Richardson’s shoes of choice for the occasion were neon yellow Nike running sneakers, which included the brand’s signature Swoosh logos in a deep orange hue. White rubber soles and upper laces finished the pair, creating a colorful and punchy ensemble that was utterly eye-catching.

You can watch Richardson’s full race on NBC Sports’ YouTube channel, below:

The athlete also shared where her self-belief and confidence during the race came from, thanking fans of the sport.

“Actually, the confidence in myself came from seeing how much love I have, I can give, I receive, and the fact of how much inspiration I put out there into the world, that even within just a short period of my career has inspired such others,” Richardson said to NBC. “It makes me give myself that courage, give myself that confidence to go out there and show that I am the sun. I am the sunshine.”

Richardson additionally shared the reasoning behind her vibrant outfit on the track.

“I really just want people to know that you can be yourself,” Richardson shared. “That means that you want to be sexy, you want to be cute, you want to express yourself in ways that nobody has before? Don’t let that stop you because you feel like there’s one way to do something. No. As long as you have the mindset for it, the confidence and the belief in your mind, heart and spirit, nothing will stop you.”

Following these two new running accomplishments, Richardson is anticipated to compete at the USATF Outdoor Championships in Eugene, Oregon later this month.

Discover Nike’s history over the years in the gallery.