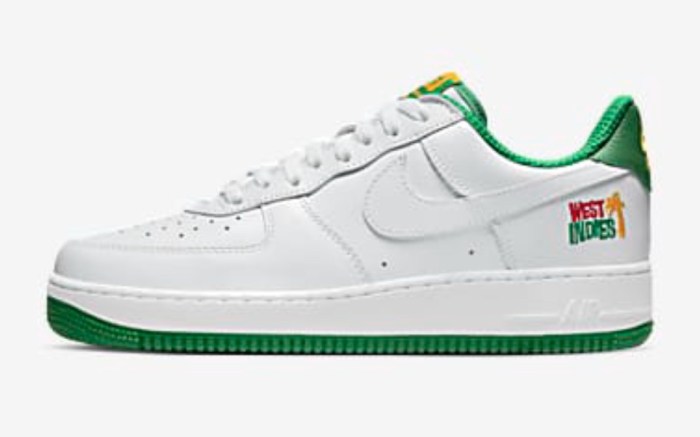 Nike has yet another iteration of its iconic Air Force 1 arriving soon, dubbed “West Indies,” which is slated to drop this month.

The “West Indies” style is one of the sneaker’s legendary colorways, first released in 2002. Now, 20 years later, the same palette is getting a re-release in its white and classic green palette that originally celebrated New York City’s West Indian Day Parade Carnival. The re-released style features the original’s key details, including sharp white leather uppers with perforated toe boxes, as well as deep green rubber outsoles, heels and collars. For an especially retro twist, the tongues and sides are also embroidered with “West Indies” lettering and palm tree logos.

In related Nike news, an unreleased Off-White x Nike Air Force 1 sneaker could be on the way, as a sample version’s image leaked via Instagram account @Wxj6550822. The collaboration also featured two styles that became available to consumers in June.

Earlier in August, Nike also revealed a global maternity training program, dubbed Nike (Move) Like a Mother, which aims to offer guidance and support amid high rates of dropout from exercise due to pregnancy. The program includes a prenatal and postpartum exercise plan with 24-workouts that includes strength, cardio, mobility and yoga movements, all designed by qualified trainers and vetted by a panel featuring five pregnancy experts and an OB/GYN, according to Nike.

Discover 50 years of Nike in pop culture in the gallery.