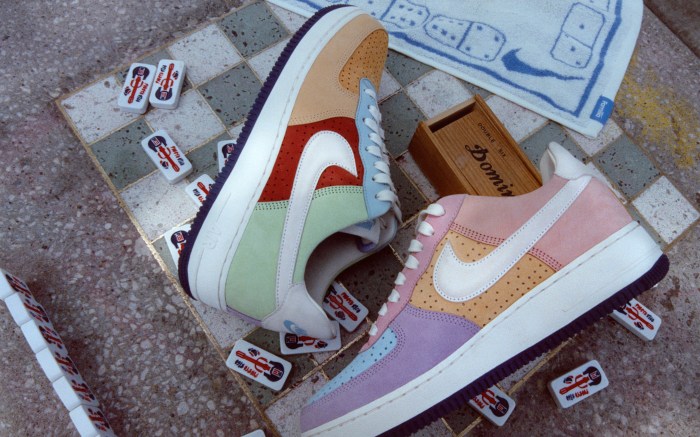 The collection features two pairs of Air Force 1s, which are set to release on June 4, and a Nike Sportswear polo, which is set to release on June 9. Notably, the collection corresponds with the 65th annual National Puerto Rican Day Parade in New York City, which will take place on June 12. The parade is consistently one of the largest annual cultural celebrations in the U.S. with this year’s parade expected to host 1.5 million spectators.

The three soon-to-be-released products feature a vibrant color palette inspired by the buildings and hand-painted signs of San Juan and the bodegas of NYC. Through the collection, Nike says it hopes to create visibility for the Boricua community while also creating products that help customers show pride in their heritage.

One pair of Air Force sneakers in the collection features each outer component of the shoe in a different colorway inspired by the streets of San Juan. The shoes, which are purposefully mismatched, feature salmon, terracotta, mint green, lavender, and sky blue hues. The sole, laces, and logo of the unique shoe are in white.

The other pair of Air Force sneakers in the collection riff on the usual white colorway of the shoe style, with a light blue logo and heel cap differentiating the pair. The heel of the shoe is embroidered with the words “Puerto Rico” in bold black stitching, with a metal lace bar also featuring the island’s name at the front of the shoe.

The collection’s sole piece of apparel — a Nike polo — features a navy, light blue, and orange graphic color swirl with a stitched specially-designed Nike logo. Portions of the polo, along with the sock liner of the shoes, notably feature a graphic design celebrating common phrases used in San Juan and amongst the New York City Boricua community.

In addition to revealing the collection, Nike also announced that it will donate a total of $625,000 to nonprofits that deliver education, athletic, and career development programs to Hispanic and Latinx youth in 2022. The company says it has also donated similar sums to such programs in past years.

“Serving athletes means creating opportunities for more people to access sport and creating more visibility for athletes to see themselves reflected in sport,” Nike said in the release.

The sneakers and polo will be available exclusively on Nike’s SNKRS App and at select retailers in Puerto Rico and the United States.