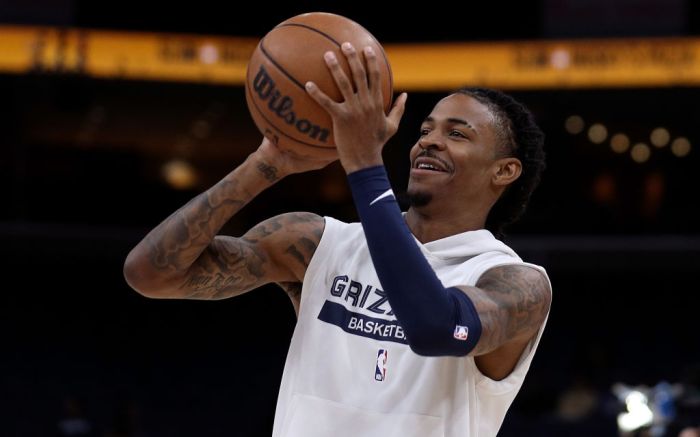 Ja Morant shared a heartwarming moment with a fan at last night’s Memphis Grizzlies vs. New Orleans Pelicans NBA game. The Grizzlies’ guard gifted a young boy his game-worn Nike sneakers after playing the match at the Smoothie King Center in New Orleans.

Before meeting his idol, the fan was holding a yellow sign describing his fight against rhabdomyosarcoma, a rare form of cancer that affects the soft tissue. The poster featured his treatments — including surgery, radiotherapy and chemotherapy — and Morant’s uniform number, 12.

The sneakers were the Nike Kyrie 1 All-Star released in February 2015. The style was Irving‘s first signature All-Star shoe and features a color scheme inspired by the City Hall Subway Station in New York, with a gray mesh upper, a black Swoosh and a part speckled, icy blue midsole.

The game marked Morant’s return from a one-game absence due to ankle soreness. Although he scored a game-high of 36 points, the Pelicans defeated the Grizzlies.

Outside the basketball court, Morant doesn’t shy away from showing his penchant for athletic shoes and designers. He has been seen wearing sneakers by Louis Vuitton, Balenciaga and Dior.

The guard is taking his fashion style to a different world, thanks to his new partnership with Beats by Dre, which was announced earlier this week. Morant teamed up with the electronics brand on an immersive event inside the popular Roblox game Dunking Simulator. Morant will be a non-playable character who will host several missions in Roblox. The experience will include a dark-mode basketball court and several dunking challenges that unlock in-game goodies, including headphones, a chain and a bear cloak.