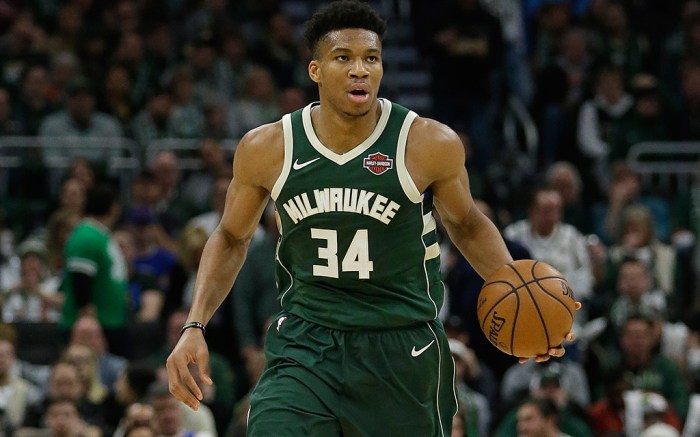 Nike is returning to its Giannis Antetokounmpo collaboration with a brand-new style — just in time for the premiere of Disney+’s film “Rise,” which covers the basketball star’s childhood while growing up in Athens alongside brothers Thanasis, Kostas and Alex.
The new sneaker silhouette, deemed the Zoom Freak 4, was revealed through the athletic brand’s social media. In the Twitter post, Antetokounmpo himself posed in a graphic gray “Freak” hoodie while holding the style — which includes red, orange, neon yellow, gray and black uppers in a streamlined silhouette. The pair appeared to feature similarly lightweight soles, reinforced toes and lace-up front as its predecessor, the Zoom Freak 3 — which can still be found on Nike’s website.
https://twitter.com/nikebasketball/status/1542190632591949824?s=20&t=hhXzy8UZKFTIAHpXufeaog
The style its being released in conjunction with “Rise,” which viewers can currently stream on Disney+. Following Antetokounmpo’s previously mentioned childhood, the movie — which stars Uche Agada as Giannis and his real-life brother, Raul, as Thanasis, each making their acting debuts — will delve into his family’s Nigerian background, as well as the struggles, achievements and cultural upbringing while growing up in Athens.
Despite this, there has not currently been a release date or time given for the Zoom Freak 4 sneakers. However, per Nike’s social post, shoppers can access the style upon its launch through the Nike app.
Here’s a look at Nike’s last Uno-themed launch with Antetokounmpo, which we reported on in October 2021.

Celebrating Uno’s 50th anniversary, the collaboration featured a line of shoes, apparel and a custom Uno card deck. The special Giannis-branded deck incorporated a new rule in which players can “force a turnover” to steal an extra discarded card. The line included Nike’s signature Zoom Freak 3, Air Force 1 and Offline slip-on in primary hued Uno colorways and the Milwaukee Bucks star‘s design. There was also a Zoom Freak 3 Member-only black colorway with an Uno 50th anniversary logo on the tongue and wild cards across the toe.

“I want every product to be genuine and authentic, and playing Uno with my brothers is a big part of our lives,” Antetokounmpo said in a statement about the line. “The Nike team has done a great job bringing my ideas to life, and I think they’ve created something for every Nike, Uno and basketball fan in this collection.”

Discover Nike’s 50 years of pop culture moments and more in the gallery.