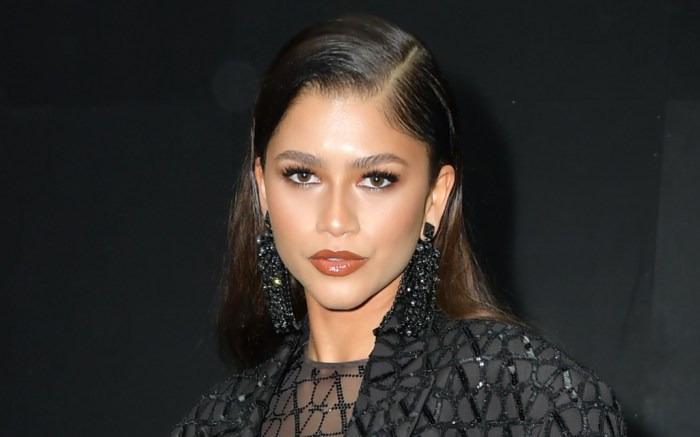 While arriving at the show on Sunday afternoon, Zendaya posed with her longtime stylist Law Roach. For the occasion, the “Spider Man” star wore a sheer catsuit covered in crystal “V” logos. Giving her ensemble a burst of slick glamour was an oversized black blazer, covered in the same V-shaped logos — a Valentino signature under Pierpaolo Piccioli — in embroidered sequins, complete with a matching set of micro-length shorts. Finishing her ensemble was a set of sparkling black chandelier earrings, featuring dark crystal fringe hanging from Swarovski-encrusted Rockstud post studs. Roach also dressed in all-black, pairing a 3D flower-accented coat with a leather Rockstud clutch.

When it came to footwear, the Emmy Award-winning actress‘ outfit was finished with a similarly logo-heavy set of pointed-toe pumps. Her style featured clear uppers with triangular toes and closed counters, covered in a black V-shaped logo print — similarly to the rest of her outfit. A set of towering stiletto heels, likely totaling 4-5 inches in height, finished her ensemble. The set created a monochrome moment while remaining slick and

However, this isn’t Zendaya’s only viral Valentino moment this fall. In September, the star wore a vintage-inspired black gown by the brand at the 2022 Emmy Awards — where she took home her second Lead Actress in a Drama series for “Euphoria.” She’s also starred in its Pink PP and Valentino Rendez-Vous campaigns this year as well, as the house’s newest brand ambassador.