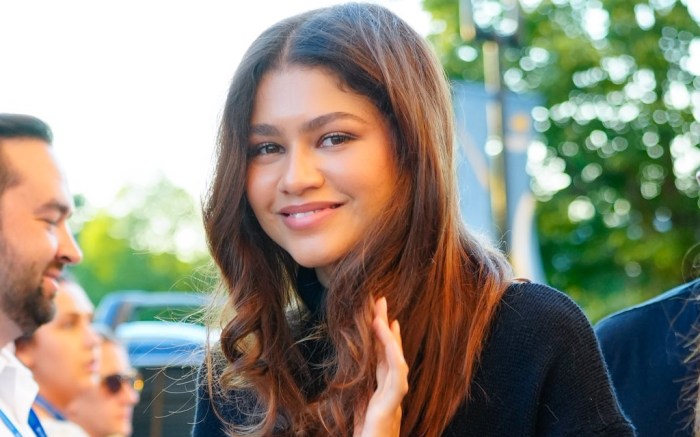 Zendaya took a comfortably chic approach to dressing for the U.S. Open 2022 ahead of her 26th birthday. The Emmy Award-winning actress arrived to witness Serena Williams’ winning second-round match on Wednesday night, alongside an audience of 29,959 people — the largest crowd of all-time at a U.S. Open evening match.

For the occasion, Zendaya stepped out in a ’90s-esque silk slip dress. The “Spider Man” star’s tan mini-length number gained a romantic spin from a swirling yellow floral print and side slit, as well as black lace trim. To ward off the oncoming fall chill, she layered it beneath a black turtleneck sweater with a faintly slouched silhouette and ribbed hem, giving it a soft texture that brought her outfit instant coziness. Completing her ensemble was a silver Cartier wristwatch, as well as — briefly — a set of gold-rimmed eyeglasses.

When it came to footwear, the “Shake It Up” actress grounded her outfit with a pair of Brother Vellies‘ Lauryn boots. The $795 style featured black leather uppers in a calf-high silhouette with rounded square toes. Giving the set an easy height boost were 3-inch block heels.

Boots like Zendaya’s are a top trend in the fall months for their fuller coverage and versatility; neutral leather and suede styles are the most popular, released in new iterations this season by Stuart Weitzman, Staud and Alexandre Birman.

Sweaters like Zendaya’s are also on the rise as must-have pieces for creating a comfortable, effortlessly chic fall look. Wider-fitting styles with slouchy fits have grown in new collections by brands including & Other Stories, which features an array of sharp neutral styles with zipped collars, stripes and ribbing in hues of black, tan and cream. Lafayette 148 has also approached the oncoming autumn staple with a classical ’90s touch, releasing turtleneck and bateau styles in neutral hues, deep blues and pinks.

The U.S. Open is the final 2022 Grand Slam tennis tournament, held at the Billie Jean King National Tennis Center in New York City. Running from Aug. 29 to Sept. 11, the tournament will air on ESPN, ESPN2 and ESPN Plus. 128 players will be competing in this year’s competition, including Serena Williams, Daniil Medvedev, Rafael Nadal, Iga Swiatek and Anett Kontaveit. The event also draws a range of celebrity guests; so far, this year’s has included Queen Latifah, Rebel Wilson, Lindsey Vonn, Hugh Jackman and Bella and Gigi Hadid.