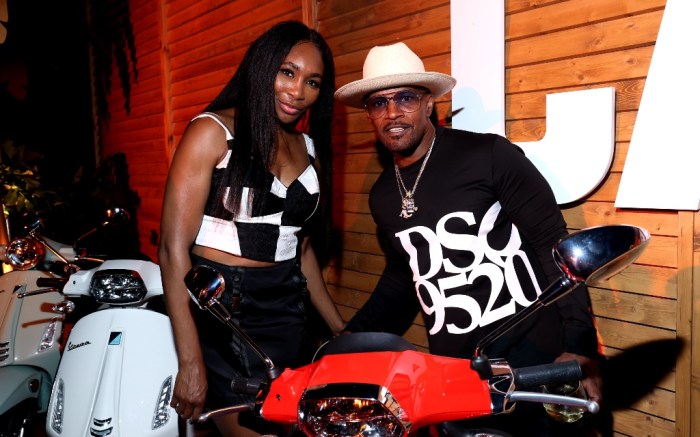 For the occasion, Williams paid homage to the Grand Prix itself in a sleek crop top. Featuring a triangular neckline and thin straps, the bustier-esque piece featured an allover black and white checkerboard print — similar to racing flags. Completing her outfit was a black miniskirt with two vertical buckles for a utilitarian touch.

The event featured a lavish dinner prepared by the iconic chef Mario Carbone, as well as a 2,500 lb. ice sculpture filled with caviar. Guests mingled and sipped cocktails by Belvedere and Lobos Tequila while Chloe Flowers performed a musical set. Following dinner, attendees were treated to a performance by DJ Khaled and Nas.

Williams opted for a casual but sharp pair of white sneakers. Her high-top set included a lace-up silhouette with paneled uppers, perforated toes and rubber outsoles. The style coordinated smoothly with her top while keeping her outfit relaxed and effortlessly cool.

Monochrome sneakers like the ESPY Award winner’s are a year-round trend, due to their versatility and ease to pair with most ensembles. The style’s popularity in both high and low-top silhouettes hails from its monochrome palette. Similar monochrome pairs have also been released from brands including Nike, Stuart Weitzman and Adidas, and worn by stars like Lindsey Vonn in recent weeks.

Discover Williams’ top street style looks over the years in the gallery.