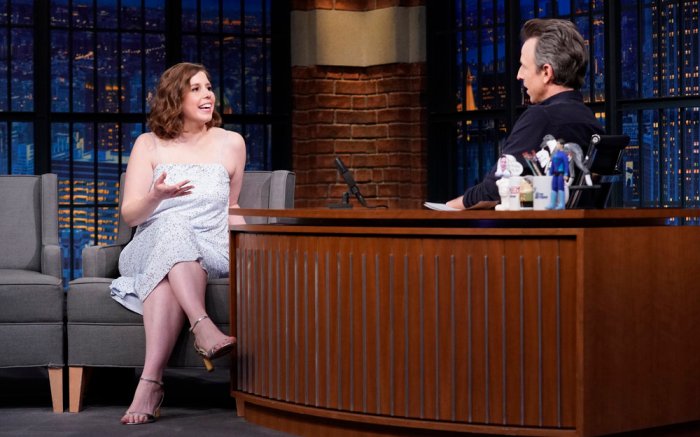 The “Saturday Night Live” alum was there last night to promote her new Showtime show, “I Love That for You,” which she co-created with former “SNL” writer Jeremy Beiler. In the show, Bayer plays a new-to-the-game host on the QVC Network, which she says is hilariously similar to “Saturday Night Live.” The comedy also stars Molly Shannon, Matt Rogers, Punam Patel and more.

Her dress is from Tibi and features tiny silver sequins over an icy white jersey. The small spaghetti straps perfectly accent the straight neckline that has a bit of a ’90s appeal from the contemporary label. Lulu Frost and Mejuri jewelry finished her ensemble.

Bayer wore silver metallic sandals — also from Tibi — that had around a 3-inch heel. The tapered toe strap gets super thin in the center, while the ankle strap provides some security to the foot. The block heel appears to be a natural-toned bamboo, which adds texture to the overall look of the shoe.

A definite standout from the interview is when Meyers asks Bayer if there were any sketches of hers that never made it on “SNL” that she feels deserves a second chance. As she begins to pitch her dismissed idea, she admits that she’s “trying to, like, will it into being funny.” To tie in her new show, Meyers even lets her pitch it like she would if she were a QVC host. Spoiler alert: Meyers understands why the sketch never quite made the cut. (Bonus points for the literal sparkle she, and her dress, brought to the pitch, though.)

At the end of the interview, Bayer definitely proved that sketches (even the ones that were cut!) are best described when wearing a good outfit. You can discover her full chat with Meyers below:

In addition to Bayer, actor Terry Crews also appeared on “Late Night” to chat about the end of his show “Brooklyn Nine-Nine,” how he owns a statue of himself and what it takes to be a football player in the NFL.

Discover how high heels evolved through the years.

Put on a pair of silver sandals for a shiny appearance.