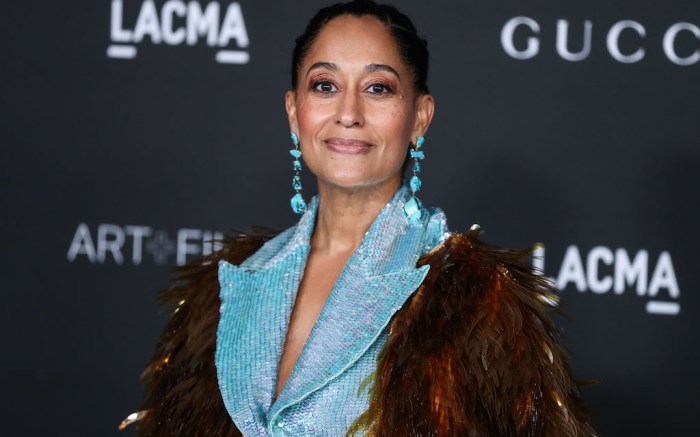 The “Blackish” star struck a power pose on Instagram in a behind-the-scenes video, wearing a white bodysuit with a plunging circular neckline. Her ensemble was complete with an oversized white coat, shrugged off her shoulders for a nonchalant appearance. “ATTITUDE ATTITUDE ATTITUDE,” Ross captioned the video, referencing Leikeli’s song “Attitude” she used as its soundtrack.

When it came to footwear, Ross gave her look a monochrome appearance with white pumps. Her pair featured triangular pointed toes, as well as leather uppers. The style was complete with stiletto heels that appeared to total at least 4 inches in height. The pair smoothly finished Ross’ look, allowing it to remain streamlined and sleek.

Pumps like Ross’ are a closet staple, able to bring instant sharpness to ensembles ranging from casual to formal. The most popular pairs often feature neutral leather or suede uppers with stiletto heels, as seen in new pairs by L’Agence, Brother Vellies and Sam Edelman. In addition to Ross, stars like Zendaya, Ariana Grande and Julia Fox have also worn sleek pumps by Christian Louboutin, Casadei and Manolo Blahnik in recent weeks. Ross is no stranger to the style herself, wearing numerous pairs over the years—like the hidden Louboutins she wore at the 2021 Emmy Awards.

Ross is known for her bold fashion statements on and off the red carpet. An avid fashion collector and fan, the “Girlfriends” star can regularly be seen in current and vintage looks from top fashion brands like Balenciaga, Chanel, Christopher John Rogers and more. She’s also a style chameleon when it comes to shoes, wearing a range of pumps, sandals and boots from labels like Versace, Andrea Wazen and Gucci, among other top brands.

Click through the gallery to discover Ross’ best red carpet looks over the years.