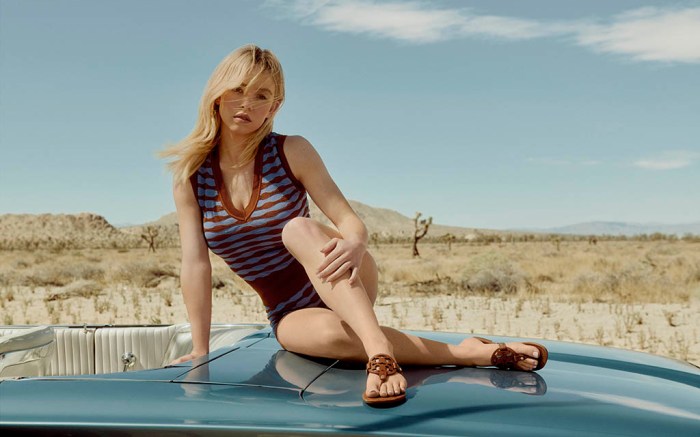 Tory Burch is stepping into summer in style, thanks to the brand’s staple Miller sandals — and Sydney Sweeney. Recently announced as the American brand’s newest ambassador, the actress stars in a new Charlotte Wales-directed campaign to show the sandals’ versatility and durability — even during an automotive emergency.

In the video released today, the “Euphoria” star drives a vintage baby blue convertible through the deserts of Los Angeles. Upon her car breaking down, Sweeney exits the vehicle — Burch’s monogrammed tool belt around her waist — to get to work, wearing denim cutoff shorts with a blue plaid bra top and metallic gold Miller sandals. As she rolls on a board to check the car’s underside and changes tires, the actress can be seen in numerous Millers in hues of brown, black, white, cherry red and orange.

You can watch the full campaign below:

If Sweeney’s campaign feels nostalgic, that’s because it’s meant to be. The star’s clothing and accessories — not to mention her car — bring to mind the energy and DIY attitude of the ’80s and ’90s. It’s also fitting, given that the campaign’s soundtrack is Missing Persons’ 1982 hit “Walking in L.A.” The clip is also centered around vintage automation, one of Sweeney’s personal passions (she collects and restores vintage cars herself) — which also draws it back to the present.

It’s worth noting that Sweeney’s footwear varies throughout the video as well; not only does she slip on Burch’s original Millers in topstitched vachetta leather, but also her newest Miller Soft version, which includes smoothly cushioned soles. Her Mel Ottenberg-curated wardrobe similarly varies, ranging from matching knit tops and bottoms to crop tops, distressed jeans and a floral minidress — often topped with a set of tinted oversized sunglasses.

Miller sandals themselves have been an essential shoe in Burch’s repertoire since they launched in 2005. The thong pair is renowned for its simple silhouette, consisting of a flat sole with a thin, T-shaped strap connected by a cutout accent forming Burch’s “Double T” logo. Over time, other varieties have emerged, such as Millers with crystal-covered logos, patent or metallic leathers. The brand has even released the Miller Cloud, a style with a molded cork soles, in both basic versions and studded Miller Cloud Coin styles in the past. However, as the campaign proves, there’s no silhouette as classic as the brand’s original.

Sweeney’s campaign serves as a reminder of the sandal’s timeless nature; it’s been a hit shoe for 17 years, and that trajectory isn’t slowing down anytime soon. It also proves the shoe and Burch’s Hollywood legacy, having been worn by legendary actresses ranging from Selma Blair to Jennifer Lawrence — and now Sweeney, one of the biggest breakout stars of the 2020s.

You can discover the Miller sandals and more Tory Burch footwear online.