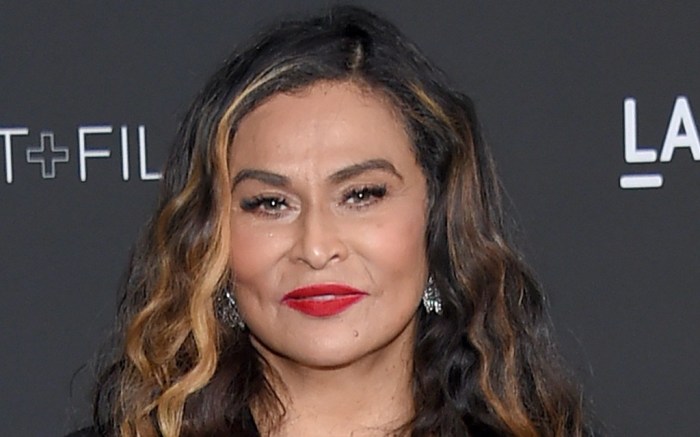 “Wow this jumpsuit can rival any couture jumpsuit in my closet and the price is exceptional you must have this jumpsuit the fabric is beautiful it’s sporty but very chic ivy park knocked this one out the park!” Lawson captioned a photo collage of her poses.

When it came to shoes, the Miss Tina founder slipped on a pair of platform heels. Though the shoes weren’t fully visible beneath her pants’ legs, the style appeared to feature red uppers and platform soles. The style gave her look a monochrome appearance ,while remaining perfectly on-theme for the most romantic day of the year.

However, Lawson also stepped out in a second Ivy Heart outfit, featuring a sheer red catsuit with red matte brief and hot pink bandeau accents. The sleek piece was layered under a thin red anorak, which included an allover reptile print and Adidas’ pink striped accents. Lawson grounded her look in a pair of red mules with pyramid-shaped heels, as well.

“Repping for the seasoned ladies,” Lawson captioned the second post, which included a video of her doing a runway walk.

The “Ivy Heart” collection launched just in time for Valentine’s Day and is available on Adidas.com. Prices run from $30 to $300 and features 30 apparel styles, 10 accessories and five footwear styles in gender-neutral sizing.

When it comes to fashion, the “Destiny’s Style” author goes bold. Lawson prefers suits for a business-worthy look, as well as flowing off-the-shoulder gowns on the red carpet. For footwear, she can be spotted in towering platform, wedge and peep-toe heels featuring metallic hues or prints. Lawson is also an iconic figure in the fashion world, having designed all of Destiny’s Child’s costumes during their tenure and later launching fashion brands House of Dereon and Miss Tina in the 2000s.

See Beyonce’s style through the years.