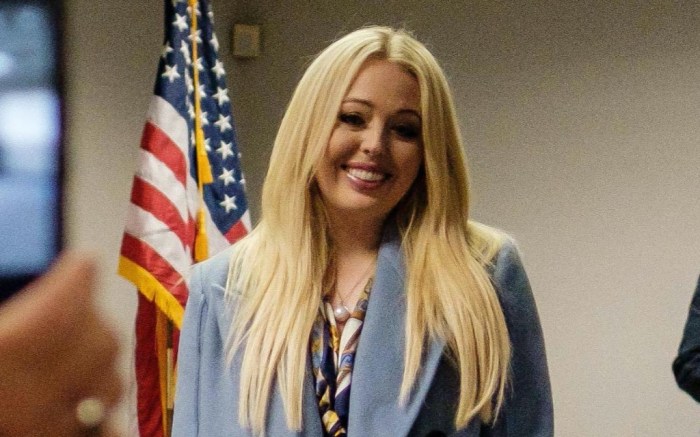 Tiffany Trump went sleek for a visit to Paris this week in an all-black look.

While posing in front of the Eiffel Tower, Trump wore black leggings with a matching fluffy coat. The Georgetown University graduate’s outerwear added a burst of texture to her ensemble, punctuated by a brown, black and white striped scarf. Trump’s look was complete with black sunglasses and a leather shoulder bag.

Trump’s shoes of choice were a pair of black combat boots. Her lace-up style featured leather uppers with rounded toes, as well as thick ridged lug soles. The pair gave her look a grungy edge, while also being practical by providing fuller coverage for winter. The style was similar to the boots she wore while celebrating New Year’s Eve with her mother, Marla Maples, earlier last month.

Combat boots are a top footwear trend in the fall and winter seasons, due to their fuller coverage and ability to create a utilitarian ensemble from their traditional laces and thick soles. Numerous brands including Louis Vuitton, Bottega Veneta and Gucci have taken the style a step further by introducing pairs with lug soles, a thicker take on combat boots’ original ridged soles. In addition to Trump, stars like Elsa Hosk, Kourtney Kardashian and Kelly Clarkson have worn similarly edgy combat boots by Christian Louboutin, Chanel and Prada in recent weeks.

When it comes to footwear, the former first daughter prefers pointed-toe pumps as a go-to style, which she’s worn for years in tones of black, beige and ivory from brands like Valentino. For events or the red carpet, she regularly dons strappy sandals and platform boots from brands like Louboutin. When off-duty, Trump keeps her shoes decidedly more comfortable, appearing in preppy loafers or flats.

Click through the gallery to see Trump’s style evolution over the years.