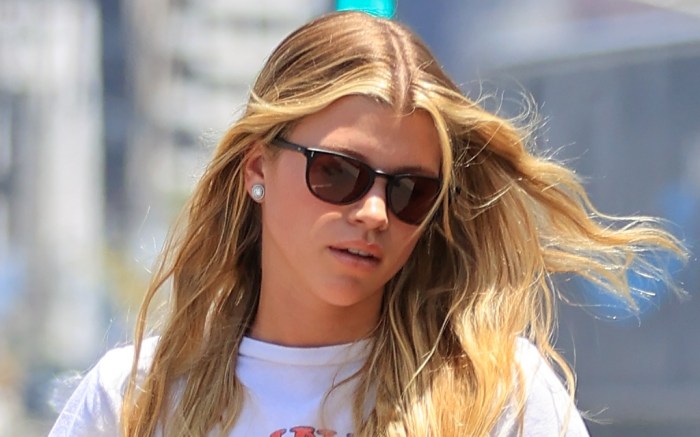 Sofia Richie brought a California-cool take to mom jeans while heading to the hair salon.

The recently engaged model was spotted strolling to said salon in Los Angeles, wearing a white T-shirt. Punctuating her casual top was a graphic print with punchy blue, red and yellow tones. The shirt was tucked into a light blue pair of high-waisted “mom jeans,” giving Richie’s outfit a ’90s spin.

Completing her ensemble for an utterly Californian vibe were dark sunglasses, diamond stud earrings and a diamond bangle — plus her engagement ring and a black leather shoulder bag.

For shoes, the model grounded her outfit with a pair of black slip-on sneakers. The style appeared to feature canvas uppers with rounded toes, as well as white rubber outsoles punctuated by a thin black line. The style added an effortlessly casual nature to Richie’s outfit, ideal for wearing while running errands out and about.

Slip-on sneakers like Richie’s are favored for their ease to — as the name implies — slip on and off. The style also provides a clean, minimalist base for most outfits thanks to its near-monochrome palette and typical lack of intricate detailing. Aside from Richie, stars including Miley Cyrus, Nicole Scherzinger and Alessandra Ambrosio have slipped into Saint Laurent, Christian Louboutin and Common Projects sneakers as well in recent weeks.

On the footwear front, Richie typically wears a range of styles and brands. The star can be seen in strappy sandals and pointed-toe pumps on the red carpet from Andrea Wazen, Tom Ford and Giuseppe Zanotti. She’s also been spotted wearing Celine loafers, as well as Chanel, Nike, APL and Adidas sneakers while off-duty. The model is a fashion world mainstay, having dropped capsule collections with Frankie’s Bikinis, PrettyLittleThing and Misguided. Earlier this past spring, she even co-designed a collection for House of Harlow 1960 with big sis Nicole Richie, and just launched her own collaborative line with Bar III at Macy’s.

Click through the gallery for more of Sofia Richie’s glam looks over the years.