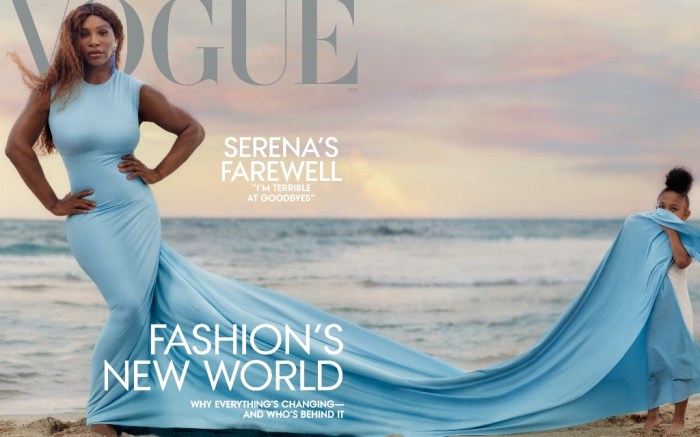 Serena Williams is officially retiring from tennis, as announced in her new cover story for Vogue‘s September issue.

In the magazine’s cover story, released online today, the award-winning athlete shared a verbal essay with writer Rob Haskell. In it, she details how she sees this next step as an “evolution” in her life, as opposed to a retirement — particularly as she looks to grow her family with husband Alexis Ohanian. For the cover itself, shot by Luis Alberto Rodriguez, Williams poses in a light blue Balenciaga gown and sparkling Bulgari High Jewelry earrings, with her four-year-old daughter Olympia holding its flowing train. Additional outfits, styled by Gabriella Karefa-Johnson, include colorful dresses from Ralph Lauren, Sergio Hudson and Danielle Frankel, as well as sculptural jewelry from Fernando Jorge.

“I’m here to tell you that I’m evolving away from tennis, toward other things that are important to me,” the Serena Ventures founder stated in the piece.

The S by Serena designer also discussed the crossroads she’s felt from leaving tennis, which Williams clarifies that — despite how other athletes have framed the joys of retirement — she hasn’t been necessarily excited to step back from the sport.

“There is no happiness in this topic for me,” says Williams. “I keep saying to myself, I wish it could be easy for me, but it’s not. I’m torn: I don’t want it to be over, but at the same time I’m ready for what’s next. I don’t know how I’m going to be able to look at this magazine when it comes out, knowing that this is it, the end of a story that started in Compton, California, with a little Black girl who just wanted to play tennis.”

As for the future, Williams is — as previously stated — focusing on growing her family with Ohanian and parenting Olympia. Describing herself as needing “to be two feet into tennis or two feet out,” Williams does emphasize the importance to her of being a hands-on parent. However, she’s also reflecting on her groundbreaking legacy in tennis, citing her admiration for Billie Jean King as someone who “transcended her sport.”

“I’d like to think that thanks to opportunities afforded to me, women athletes feel that they can be themselves on the court,” Williams shares. “They can play with aggression and pump their fists. They can be strong yet beautiful. They can wear what they want and say what they want and kick butt and be proud of it all.”

Vogue’s September 2022 issue will be available on newsstands on August 16.