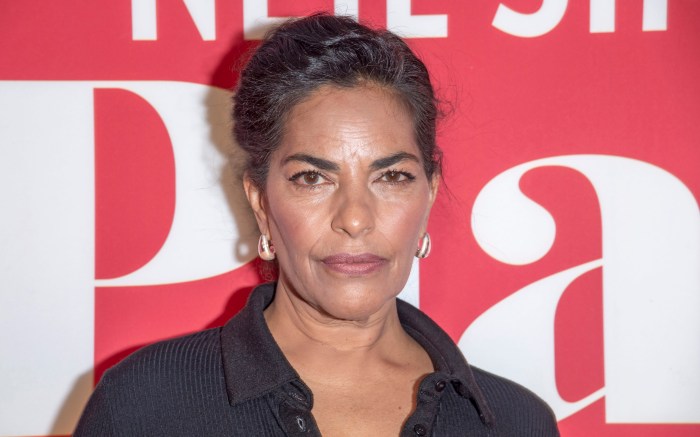 While arriving at the Hudson Theater, the “And Just Like That…” star wore a slick cutout dress styled by Caitlin Burke. The black midi-length Jonathan Simkhai number featured a sharp collar and ribbed texture, as well as a button-up silhouette that created a knee-high slit and deep neckline. Adding to the garment’s edge were two thin front cutouts. Choudhury’s accessories were equally sharp: a pair of chunky huggie hoop earrings, a classic signet ring and sheer black tights.

Printed heels like Choudhury’s are back in rotations during the high heel renaissance. Varying from animal prints to floral patterns, the accent adds a burst of texture and color to any outfit — like recent pairs by Kate Spade New York, Larroude and Sam Edelman. Aside from Choudhury, stars like Lucy Hale, Dua Lipa and Kendall Jenner have also slipped on printed Miu Miu, Moncler and Gianvito Rossi pumps in recent weeks.

Choudhury is a new star in the fashion world, following a stylish turn as Seema Patel in “And Just Like That…” While on the red carpet, she can be spotted in embellished sandals and pumps from brands like Roger Vivier. As Patel, her footwear’s taken a turn for the sleek, including platform heels and boots from brands like Christian Louboutin and Valentino. Aside from wearing stylish shoes, Choudhury has also been embraced by the fashion industry, attending shows for Ulla Johnson and Altuzarra during New York Fashion Week this season.

Discover the best “And Just Like That…” fashion moments in the gallery.