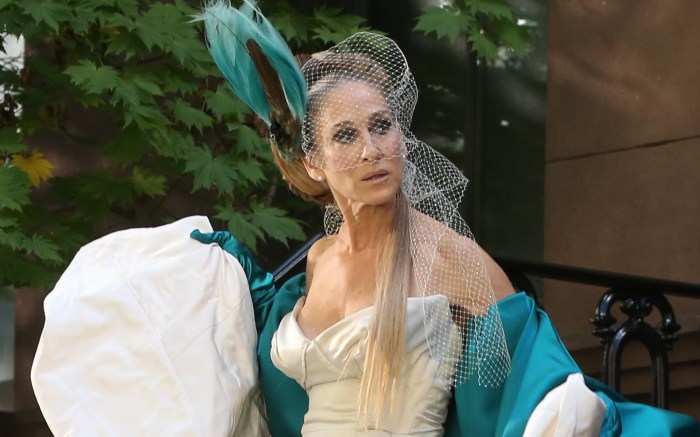 Sarah Jessica Parker re-lived one of Carrie Bradshaw’s greatest fashion moments of all time for “And Just Like That…” in New York City today.

While stepping out of her trailer, as documented by the HBO Max show’s Instagram page, Parker wore the Vivienne Westwood “Cloud” wedding gown from the 2008 “Sex and the City” film. Her highly documented ensemble — as many fans will recall — featured a pointed strapless corset top cast in golden ivory silk-satin, with a matching skirt and voluminous bottom layer made from gauzy white silk taffeta.

The resulting piece, famed for its sculpted bodice and dramatic silhouette, was — like the film — paired with a spray of blue feathers from a taxidermy bird. However, this time around, it was finished with white netting tied around Parker’s face with a dramatic bow train, in the place of the film’s sweeping white veil. Parker also layered with a black thermal jacket to ward from the chill while wearing the strapless piece.

“Déjà vu?” the show captioned the post, which has already gone viral online.

Parker’s outfit was complete with statement shoes, as well: a teal satin pair of pointed-toe pumps, which included slingback straps and thin stiletto heels. The style contrasts sharply from the film, where she wore a metallic gold version of Dior’s 2008 Extreme Gladiator platform sandals — one of several colorways from the film, cementing it as a cult-favorite shoe.

Eagle-eyed fashionistas will also recall the heightened popularity of the Westwood wedding gown at the time of the film’s release. Part of Westwood’s Gold Label 2007-08, the dress gained instant fame when worn onscreen by Parker. Though this colorway was a custom design for the film, the piece was soon available as a made-to-order design with custom fabrics and colors for $15,700 or more. In 2009, Westwood also released a similarly corseted “Wilma” collection of ready-to-wear, including a cocktail dress identical to the gold layer of Carrie’s gown, retailing for $9,875 — which sold out within a day, according to British Vogue at the time.

Bradshaw’s wedding attire follows Parker’s most recent outing in New York on Thursday morning, wearing a new ensemble by costume designers Molly Rogers and Danny Santiago. For that occasion, the actress donned a white vintage Westwood dress — custom cut into a jumpsuit by Kate McGuire — that was trimmed with delicate lace, complete with pleats along its bodice and skirt. White platform heels and a Pre-Fall 2022 Thom Browne handbag finished her ensemble.