Sarah Jessica Parker Suits Up in Vest, Trousers & Satin Pumps for ‘And Just Like That…’ Season 2 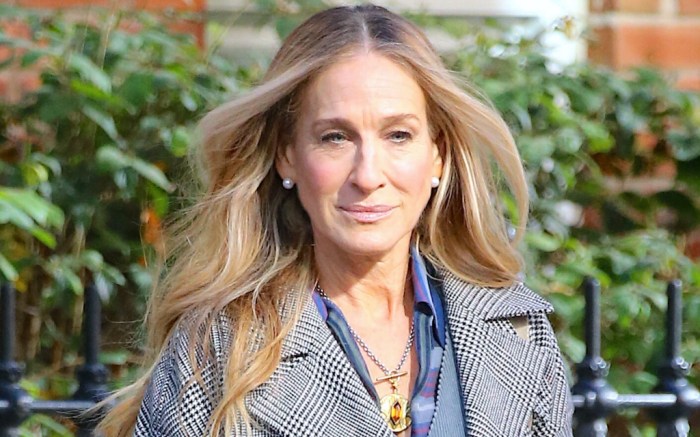 Sarah Jessica Parker stepped out in sharp fall style to film “And Just Like That…” in New York.

While walking through Manhattan on Monday afternoon, Parker wore a matching gray button-up vest and trousers, ending in ballon-like cuffs slightly below the knee. The matching set, crafted from soft corduroy, was layered atop a pair of dark gray pointelle knit socks and a blue and maroon plaid button-up shirt.

Parker’s attire was finished with a light gray and black houndstooth plaid coat, as well as a bejeweled gold pendant necklace and pearl stud earrings. Her ensemble also gained a burst of sparkle from a circular black leather top-handle bag, covered in light-catching holographic crystals.

Parker’s attire bore a remarkable similarity to a gray vest and pants she wore in season 1 of the romantic comedy show, paired with a polka-dot tie, shirt and purple satin booties. When it came to footwear in this season 2 ensemble, however, the “Failure to Launch” actress stepped into a sharp set of pumps. Her black satin pair featured triangular pointed toes, as well as closed counters and 3-inch stiletto heels. Giving the set a burst of quirky romance were large satin bows on each of their toes, adding a quirky finish to the slick set.