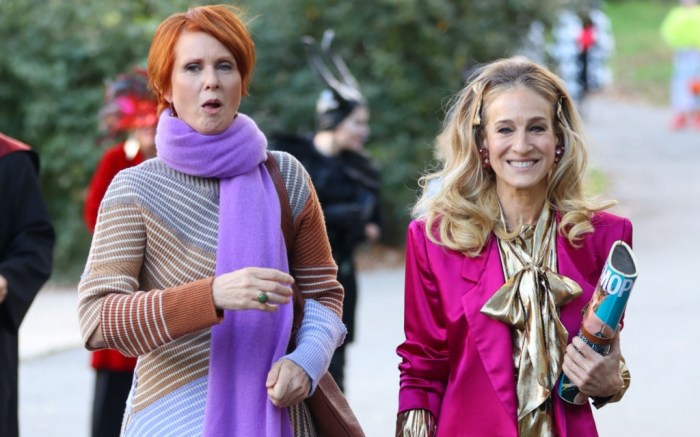 Sarah Jessica Parker brought heavy metal — heavy metallics, that is — to film “And Just Like That…” in New York this afternoon.

While walking through Prospect Park in Brooklyn as Carrie Bradshaw with Cynthia Nixon (as Miranda Hobbes), Parker wore a gold pussybow blouse and knee-length skirt, styled by costume designers Molly Rogers and Danny Santiago. Both pieces featured the same metallic sheen, as well as a round polka-dot print. Layered atop was a fuchsia silk blazer, adding a vibrant pop of color to the matching set.

Parker’s ensemble was complete with gleaming pink round crystal post earrings, as well as two thin metallic gold hair bows and a blue clutch modeled to look like a rolled-up issue of Cosmopolitan magazine.

When it came to footwear, the “Failure to Launch” actress wore a shiny pair of sandals. Giving her light magenta set a sleek edge were faint reptilian embossments, as well as buckled slingback straps. The style was finished with overlapping toe straps to form a close-toed cutout silhouette, as well as thin stiletto heels totaling at least 4 inches in height for a slick elevation boost.