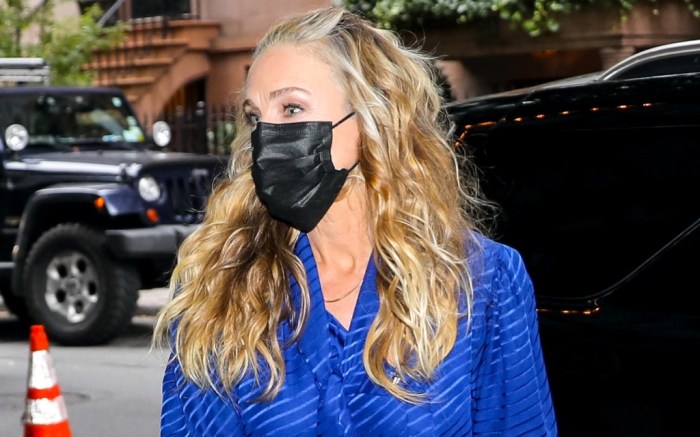 Sarah Jessica Parker stepped back into Carrie Bradshaw’s heels — with a nod to one of her most memorable outfits — while filming HBO Max’s “And Just Like That…” in New York City.

When it came to footwear, Parker slipped into a set of vibrant fuchsia pumps by Roger Vivier. Her satin style, one of Gherardo Felloni’s signature I Love Vivier silhouettes, featured pointed toes with a rounded sweetheart opening to resemble the top of a heart. The set was complete with thin 4-inch lacquered heels, giving the romantic style a sleek finish. Though Parker’s pair is currently unavailable, similar styles can be found in Vivier’s boutiques and website.

The moment also marked a Vivier return for Parker, who similarly wore a memorable set of heels by the brand in the first season finale of “And Just Like That…” During its final scene, Bradshaw scatters Mr. Big’s ashes in Paris while wearing an orange Valentino couture gown and a light pink pair of Vivier’s spring 2021 platform pumps. The buckled style featured slingback straps, satin uppers and squared toes atop thick soles, complete with 4.75-inch stiletto heels. The dramatic ensemble was finished with pink gloves and the Eiffel Tower-shaped Timmy Woods clutch from 2008’s “Sex and the City” film.

Parker’s latest outfit is her third public ensemble as Bradshaw from the dramatic comedy show’s second season, which began filming in New York City earlier this fall. Her first — which went instantly viral — featured archival 2008 Dior Extreme Gladiator sandals and a zippered cargo jumpsuit, paired with J.W. Anderson’s new pigeon-shaped clutch. As for what Carrie and co. will wear in the rest of season 2? We [can’t] help but wonder…though all will surely be revealed when filming continues in Manhattan this autumn.