Sarah Jessica Parker Steps Into Fall in Plaid Coat, Cardigan & Oxfords for ‘And Just Like That…’ Season 2 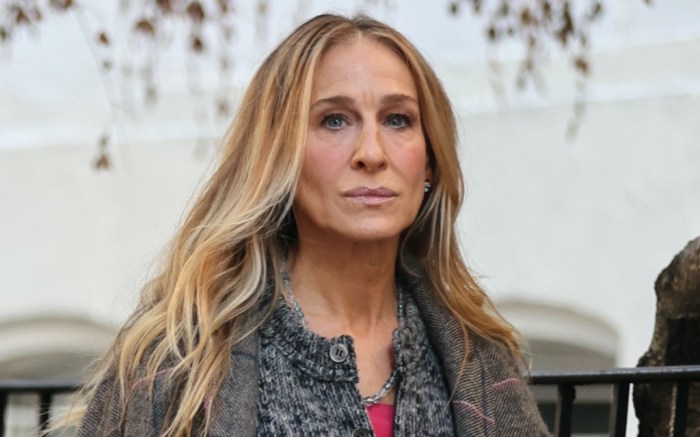 Sarah Jessica Parker was cozily dressed as Carrie Bradshaw to film “And Just Like That…” in New York today.

While walking through downtown Manhattan, Parker wore a long magenta silk dress. Her maxi-length pleated piece included a crinkled texture with a paneled bodice, overlaid with a knee-length black and gray knit cardigan. Bringing her ensemble a fall-worthy finish was a dark brown herringbone wool coat overlaid with a pin and gray plaid pattern, as well as a clear beaded necklace, crystal stud earrings and a black velvet clutch trimmed in metallic gold leather.

When it came to footwear, Parker laced into a formal set of Oxfords. Her black and white leather pair featured a lace-up silhouette with almond-shaped toes, as well as short heels and paneled perforations for a dapper finish. The set proved an eclectic base for her attire — fitting, given Bradshaw’s renowned eclectic sense of style — while remaining practical for walking outdoors.