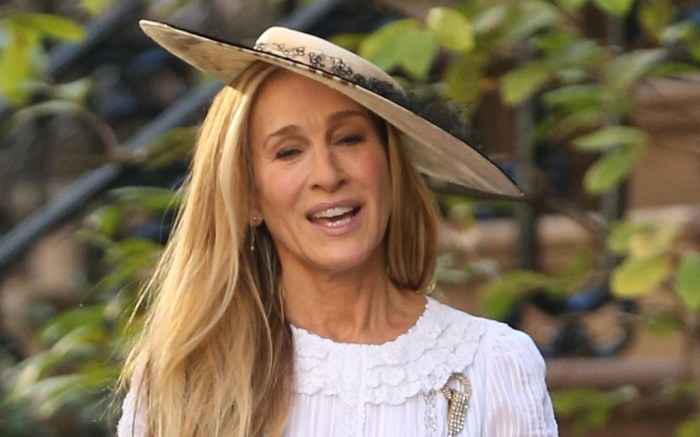 Sarah Jessica Parker brought the power of prints to “And Just Like That…” on Wednesday morning.

While filming in-character as Carrie Bradshaw with Kristin Davis for the second season of the HBO Max drama, the Emmy award-winning star wore a whimsical ensemble by costume designers Molly Rogers and Danny Santiago, featuring an all-white palette. This Bradshaw outfit prominently featured a high-necked vintage Vivienne Westwood dress — converted into a jumpsuit by Kate McGuire — that was trimmed with delicate lace, complete with pleats along its bodice and skirt.

Accessorizing the romantic piece was a gold and diamond fringed brooch, as well as delicate Mimi So earrings and a black netting-trimmed fascinator. Her ensemble was finished with two books, as well as a mint green floral-embroidered Thom Browne handbag from the designer’s pre-fall 2022 collection.

When it came to footwear, Parker opted for a set of white leather platform heels. Her style featured thick soles with wide uppers that included a peep-toe opening. The set, completed with tall heels totaling at least 5 inches in height, gave her a towering height boost while remaining minimalist and monochrome alongside the matching jumpsuit.

Bradshaw’s white attire follows Parker’s most recent outing in New York while filming on Wednesday afternoon. For that occasion, the actress donned a plaid coat with a striped dress and swirl-printed Pierre Cardin crossbody handbag, paired with blue cutout boots from her own SJP by Sarah Jessica Parker brand’s Duchessa Gardini line. It’s worth noting the potential for that footwear to be released in the future, as well; previously, in the first season of “And Just Like That…,” Parker donned numerous colorful pumps, mules and peep-toe sandals accented with crystals, bows and sequins onscreen — later revealed to be the secret debut Duchessa collection.