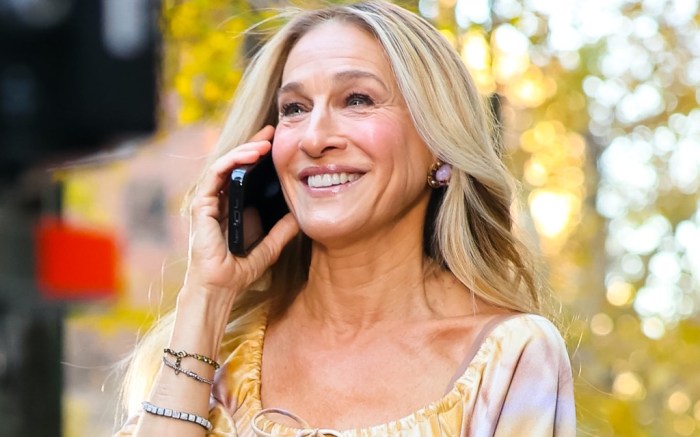 While walking through Manhattan on Monday afternoon as Carrie Bradshaw, Parker wore a bohemian midi dress, styled by costume designers Molly Rogers and Danny Santiago. Her ensemble featured a light cream base, accented by a curved neckline with a romantic front tie, sash-belted waist and draped ballooned sleeves. Adding a truly bohemian finish to the piece, however, were layered stripes of golden yellow, dusty red and pale purple in dip-dyed shapes across its bodice and hem.

Parker’s ensemble was accessorized with layered thin crystal and chain bracelets, as well as light purple post earrings and a white, gold and silver beaded clutch

When it came to footwear, the “Failure to Launch” actress wore a shiny pair of paneled pumps. Her pointed-toe set featured triangular toes and closed counters, crafted from color-blocked peach pink and golden amber satin. Finishing the pair were thin stiletto heels totaling at least 4 inches in height, giving the actress a sharp height boost. The style appeared to hail from Parker’s own SJP by Sarah Jessica Parker collection, featuring the same silhouette as her hit Rampling pumps — as well as the Duchessa silhouette she secretly designed for the show’s first season.