Sarah Jessica Parker Masters Power Prints in Plaid, Stripes & Swirls with Cutout Boots for ‘And Just Like That…’ Season 2 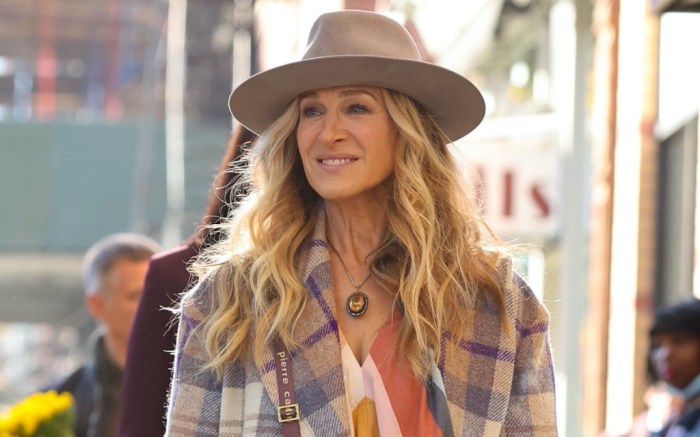 Sarah Jessica Parker brought the power of prints to “And Just Like That…” on Wednesday morning.

While filming in-character as Carrie Bradshaw for the second season of the HBO Max drama, the Emmy award-winning star wore a colorful ensemble by costume designers Molly Rogers and Danny Santiago, featuring a purple, beige and orange plaid double-breasted coat.

The outerwear was layered atop a multicolored striped midi dress, featuring a diagonal print in hues of yellow, red, orange, purple and gray. Finishing her ensemble was a dark brown Pierre Cardin crossbody bag covered in a beige swirl print, as well as a beige fedora, dark crystal stud earrings and orange oval jewel pendant necklace.

A multi-toned gold bracelet and white enamel ring finished the ensemble, which mixed multiple prints with coordinating tones to create a complementary yet clashing appearance.

When it came to footwear, Parker opted for a set of blue suede boots from her own namesake brand’s Duchessa Gardini line. Her turquoise-hued style included knee-high uppers with almond-shaped toes and thick 4-inch heels. The set included front cutouts accented by round silver eyelets, as well, giving it a sleek finish with a two-toned potential when layered with socks, tights or leggings. The pair added a tonal pop of solid color to her ensemble, grounding it with Bradshaw’s signature eclecticism.

It’s worth noting the potential for Parker’s footwear to be released in the future under her own SJP by Sarah Jessica Parker collection. Previously, within the first season of “And Just Like That…,” she donned numerous shoes onscreen — including pumps, mules and peep-toe sandals accented with net bows, crystals and sequins — as Bradshaw, later revealed to be the secret Duchessa collection. All styles, ranging from $415-$695, have been available since on SJP’s website.