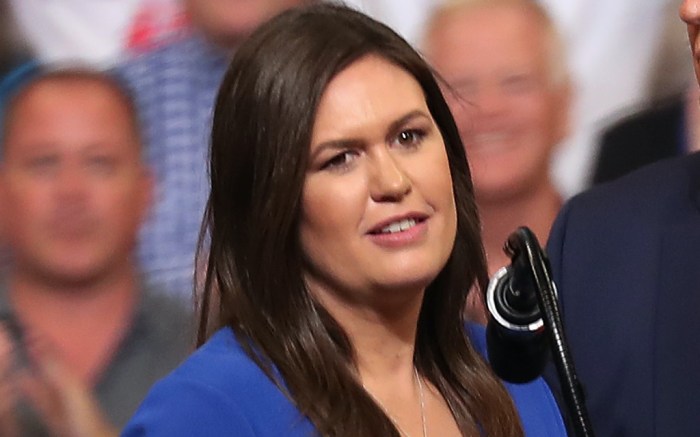 Sarah Huckabee Sanders was seeing stripes in Arkansas this week.

The former White House press secretary posed with the Arkansas police force on Instagram to announce her nomination of captain Mike Hagar as the director of Arkansas State Police, as well as AJ Gary’s continued position as director of emergency management. During the occasion, she wore a long-sleeved minidress with a blue and white striped pattern. Giving the piece a faintly bohemian spin was a tiered skirt, as well as a smocked hemline and sleeves. Sanders completed her outfit with a pair of hoop earrings.

“We will not allow crime to ravage our communities – we are a law and order state,” Sanders began her post’s caption, prior to sharing her nominations for Hagar and Gary.

When it came to footwear, Sanders paired the dress with a set of leather boots. Her knee-high style featured tobacco-brown uppers with closed toes, as well as a faintly slouched texture. Though the pair’s heels could not be seen, it’s likely they were complete with short heels totaling 2 to 3-inches in height for a walkable height boost. However, this wasn’t her only instance wearing the dress; she also paired it with a pair of light tan mules earlier this fall during a governor rally.

For footwear, Sanders often wears neutral shoes with low heels for public appearances. The Arkansas governor’s heels often include low and block-shaped silhouettes across mules and pointed-toe pumps in shades of tan, brown and black. When off-duty, she also wears espadrilles and knee-high boots in similar hues.

PHOTOS: Discover how high heels have evolved over the years in the gallery.