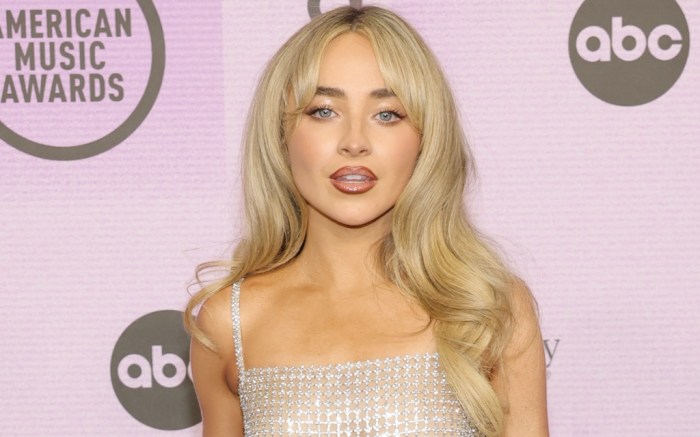 While posing in several videos within a new clip, the “Emails I Can’t Send” musician stepped out behind a wall lip-syncing to viral audio from Disney’s “Sofia the First.” In the clip, she wore a strapless satin minidress with a folded neckline, paired with a fur-textured brown hat and rimless sunglasses. Further adding an early 2000’s spin to her outfit were sheer gray over-the-knee stockings, as well as a crystal collar necklace with a small heart pendant.

When it came to footwear, Carpenter slipped into a set of pointed-toe pumps. Her style appeared to feature the set’s triangular toes and closed counters within leather uppers, cast in a metallic silver hue. Though the pair’s heels couldn’t be seen, they likely included 4-inch stiletto heels — given the style’s traditional silhouette, which smoothly streamlined Carpenter’s attire.

However, this wasn’t Carpenter’s only viral fashion moment in recent weeks. During the 2022 American Music Awards, the “Sue Me” singer also made waves in a sparkling crystal fringe crop top and miniskirt from Oscar de la Renta, paired with towering silver platform sandals.

Carpenter’s shoe style is often bold and sleek. The “Girl Meets World” star frequently wears metallic and neutral-toned platform sandals and pumps on the red carpet, hailing from top brands including Jimmy Choo, Giuseppe Zanotti and Valentino. When off-duty, Carpenter can also be seen in thick-soled sneakers and ankle boots from brands including Nike. The performer has grown within the fashion world in recent years, starring in campaigns for Fendi, Converse and Aeropostale, as well as becoming a front-row fixture for brands including Versace, Tod’s, Coach and Carolina Herrera.

PHOTOS: Discover Sabrina Carpenter and more celebrity arrivals on the red carpet at the 2022 AMAs.