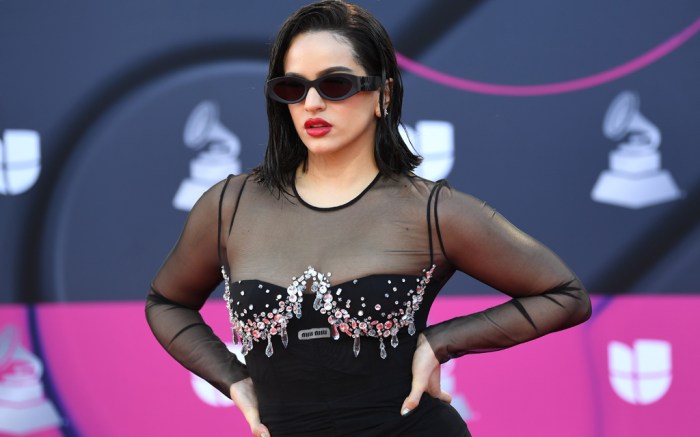 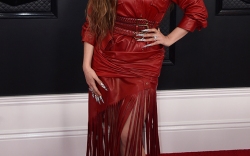 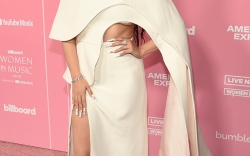 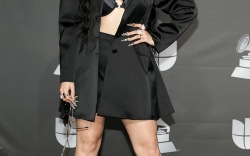 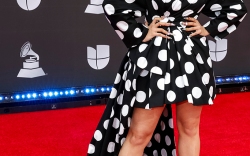 Rosalía brought her edgy style to the stage while performing in Paris this week.

On Wednesday, the “Catalina” singer performed in France, as seen in a photo dump on Instagram. For the occasion, Rosalía wore a black and light tan paneled bodysuit beneath a matching cropped leather jacket. Completing her outfit was a matching miniskirt, featuring a flap silhouette that was cinched with a buckled waist.

“Being a popstar never lasts you but this tour I’ll always carry in the heart LOS MOTOMAMI WORLD TOUR IS OVER radeTHANK YOU THANK YOU TO ALL Q HAVE COME AND ALL Q HAVE DONE THIS TOUR WITH ME❤️ grateful for x life,” her translated caption read.

When it came to footwear, the Acne Studios campaign star appeared to wear a set of curved over-the-knee boots. The slouchy style seemingly included exaggerated flared uppers, paired with glossy black patent leather curved shafts. Though the style’s heels could not be seen, they likely encompassed a pointed-toe silhouette with stiletto or block heels, similar to past pairs she’s worn over the years.

Rosalía also posed backstage for the occasion in another set of shoes: black pointed-toe pumps, complete with crossed fronts and a sheer base. The style was paired with a black silky cutout dress by Rick Owens, seen when the singer draped her arms around Owens muse and designer Tyrone Dylan Susman and jewelry designer Alan Crocetti on Susman’s Instagram.

The “Con Altura” singer’s shoe style, much like her wardrobe, has a range that’s edgy and eclectic. Rosalía often wears luxury labels, including Prada, Louis Vuitton and Balmain, as well as independent brands like Sinead Gorey, Pushbutton and Feng Chen Wang. On the footwear front, she can regularly be seen in platform boots by Versace, Haiki 851 and Rick Owens. However, on more casual occasions, she dons colorful Nike and Air Jordan sneakers, Eytys slides and platform Crocs clogs. Rosalia’s ties to the fashion and beauty industries have rapidly grown in the last several years, as she’s appeared in Nike’s Air Max 2090 ads, Savage x Fenty’s “Vol. 2” runway film and became an ambassador for MAC’s Viva Glam campaign.

PHOTOS: Click through the gallery for more of Rosalía’s standout style over the years.