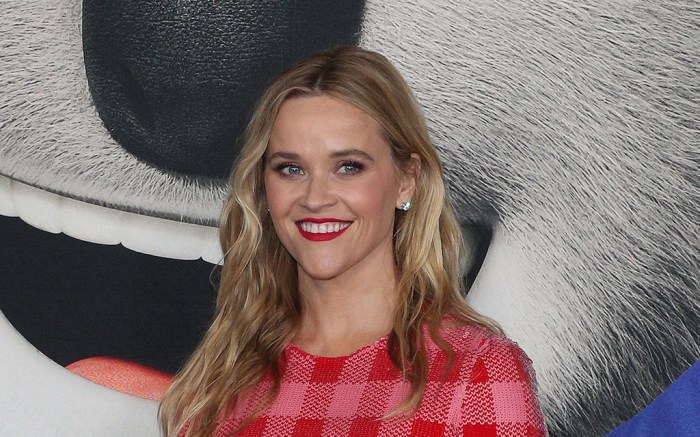 Reese Witherspoon was breezily dressed for summer while attending the high school graduation of her son, Deacon Phillippe.

The “Legally Blonde” star arrived for the occasion on Wednesday afternoon in a blue wrap dress, as seen on ex-husband Ryan Phillippe’s Instagram feed. The summer-worthy number featured a tied waist belt, as well as a knee-length skirt. Giving it an added sense of optimism was an allover print of small white polka dots. Witherspoon accessorized with a gold cuff bracelet, hoop earrings and black sunglasses.

Phillippe was on-site in a white T-shirt, black jeans and his own graduation robes for their son’s graduation, which was held at home.

When it came to shoes, Witherspoon’s footwear wasn’t visible in Phillippe’s original post. However, on Instagram Stories it was revealed she wore a two-toned pair of sandals. The leather style included a warm brown front strap, as well as a wider buckled upper strap in a darker brown hue. Though her heels weren’t visible, Witherspoon’s feet angles suggested the pair included heels totaling at least 3 inches tall.

Sandals like Witherspoon’s add an efficient height boost to any warm weather ensemble. Pairs similar to the actress’ often include neutral uppers with low-height heels, allowing them to effortlessly be paired with outfits ranging from casual to formal — as seen in new styles from brands including Alexander McQueen, DKNY and Kurt Geiger. Aside from Witherspoon, stars including Chrishell Stause, Taeyeon and Hailey Baldwin have also slipped into mules by Giuseppe Zanotti, Roger Vivier and Femme LA in recent weeks.

Witherspoon’s no stranger to a sharp sandal, wearing numerous pairs over the years.

When it comes to footwear, Witherspoon’s pairs often follow the simple route to complement her colorful attire. On the red carpet, the “Little Fires Everywhere” star usually opts for jewel-toned or neutral pumps and sandals from Christian Louboutin, Jimmy Choo and Gianvito Rossi. When off-duty, she can be spotted in low-top leather or athletic sneakers by Common Projects, Veja and Hoka One One. The star’s also a fashion leader in her own right, launching her Draper James brand in 2015.