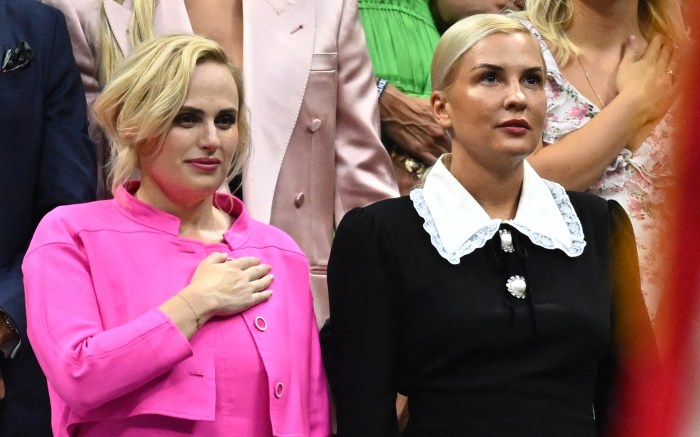 Love is in the air at the U.S. Open — particularly for Rebel Wilson, who arrived for the tennis tournament with girlfriend Ramona Agruma.

While arriving at the USTA Billie Jean King National Tennis Center on Monday, the “Senior Year” star wore a hot pink knee-length Courreges dress and a matching jacket. Her formal ensemble, punctuated by a black leather top-handle Hermés Birkin bag, was given a sporty finish with white-rimmed buttons and thin mesh panelling near its hemline and neckline.

For footwear, Wilson went neutral in a set of nude heels. The “Pitch Perfect” star’s shoes featured pointed toes with paneled mesh uppers, as well as a capped-toe lining. Completing the set were block heels totaling 2-3 inches in height, styled by Elizabeth Stewart.

Wilson’s day at the tournament with Agruma arrives after she came out in June on Instagram, revealing her relationship with Agruma — nicknamed her “Disney Princess” — after the Sydney Morning Herald attempted to “out” her by giving her two days to comment on her sexuality, according to the Mirror.

The actress has since received an outpouring of support on social media, particularly during LGBTQIA+ Pride month, both from fans and celebrity allies including Anna Kendrick, Brittany Snow, Elizabeth Banks, Melanie Griffith and Paris Hilton.