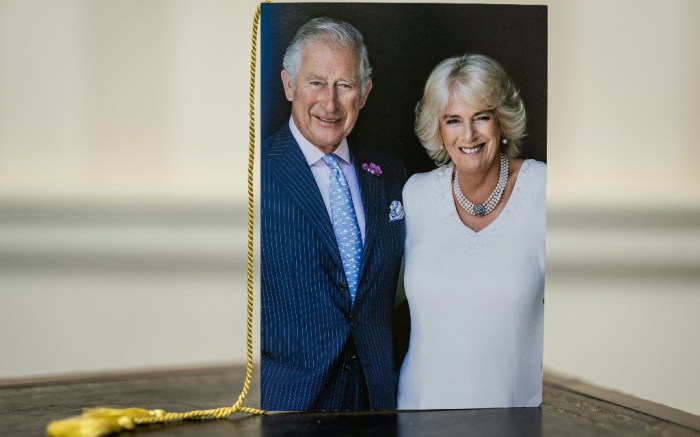 Queen Consort Camilla was formally dressed with King Charles III for the royal birthday cards sent to those celebrating their 100th birthdays this year. The release of signed cards from Buckingham Palace to mark 100th and 105th birthdays and 60, 65 and 70-year wedding anniversaries to those in the United Kingdom, the Realms and overseas territories is a royal tradition that dates back to 1917.

While posing alongside King Charles III in a 2018 portrait used for this year’s cards, the new queen wore a white long-sleeved dress. The simple piece was elevated from a collar embroidered with blooming flowers. Completing her ensemble were pearl drop earrings, as well as a layered pearl necklace with a round silver pendant. Charles complemented Camilla in a navy pinstriped suit and light blue shirt and tie, accented with a light blue pocket square and purple flower pin.

When it came to footwear, the Queen’s shoes were not visible in the portrait. However, it’s likely she slipped into a pair of low-heeled pumps with closed toes in a matching or coordinating color; in particular, British label Sole Bliss has been a popular choice for her over the years, as she owns at least 11 pairs. The queen is estimated to have worn the label’s Valencia pump at least 80 times, according to a brand statement; she also frequently wears its pointed-toe Kitty pumps during public occasions, as well.

This isn’t the only occasion where the royal’s fashion choices have taken center stage. Earlier this month, she stepped out in Ballater for a reception at Station Square, wearing a plaid gray wool jacket, plaid skirt and matte black tights. Her ensemble was finished with Sole Bliss’ Sydney pumps, a pointed-toe $249 style with black suede uppers and 1.25-inch block heels.