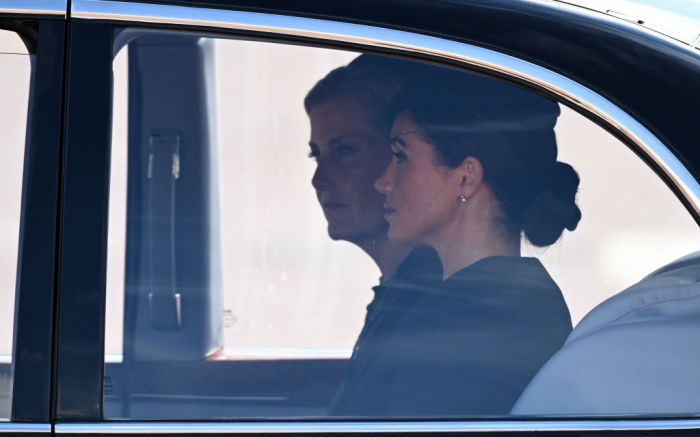 Sophie, Countess of Wessex, joined the procession for the lying-in-state of Queen Elizabeth II in London today. Prince Edward’s wife was driven in a car in the company of Prince Harry’s wife, Meghan Markle. They both followed Queen Elizabeth II’s coffin while it was taken by a Gun Carriage of The King’s Troop Royal Horse Artillery from Buckingham Palace to Westminster Hall.

Sophie wore a black long-sleeved belted midi dress for the occasion, following the royal tradition of somber dressing during the mourning period. The princess accessorized minimally with a cross silver necklace and a black hat.

For footwear, Sophie wore classic black pumps pairing them with dark stockings. Although there are no official rules for royal women regarding wearing tights in public, it’s expected that royal women will wear black or nude stockings during the mourning period as a sign of respect to Queen Elizabeth II.

During the ceremony at Westminster Hall, the Countess of Wessex joined her husband and other members of the royal family, such as Kate Middleton, Queen Consort Camilla and Princess Beatrice, to honor Queen Elizabeth II.