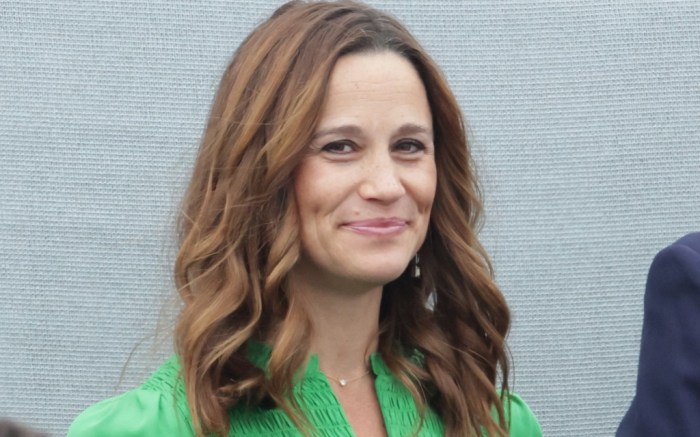 Pippa Middleton took a seasonal spin on pregnancy style for Queen Elizabeth II’s Platinum Jubilee, which celebrates the Queen’s 70-year-reign. Middleton made an appearance during the event’s Platinum Party at the Palace, held at Buckingham Palace, to witness a performance by Jax Jones on Saturday.

The sister of Kate Middleton, who’s expecting her third child with husband James Matthews, arrived in a green dress for the occasion. The elegant gown featured lightly rounded long sleeves with flounced and smocked cuffs. Giving the dress a breezy bohemian element was a high flounced neckline with a vertical V-shaped accent, as well as a smocked A-line bodice.

When it came to shoes, Middleton’s footwear was not visible. However, it’s likely she opted for a set of low-heeled sandals, flats or lace-up espadrille wedges. The royal has worn the styles numerous times over the years for warm weather occasions, so it would appear likely she’s continue the trajectory for the Jubilee. These often hail from a range of brands, including Castaner, London Sole and Ash.

Discover More Stars at the Platinum Jubilee Party at the Palace