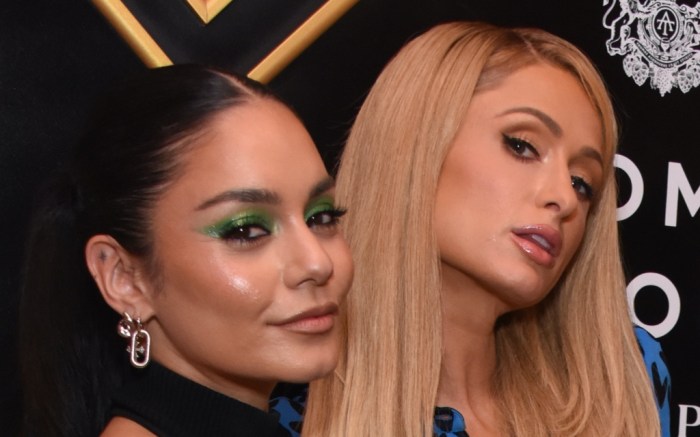 The “Simple Life” star struck a pose at the event on Saturday night, wearing a blue Diane von Furstenberg wrap dress. The midi-length number featured long sleeves and a long waist tie, covered in a black leopard print for an added burst of patterns. Finishing Hilton’s ensemble were black leather fingerless gloves. The star took a moment to snap photos at the event with its star attendees, including Vanessa Hudgens, Ashley Benson and Rosario Dawson.

The “Stars Are Blind” singer finished her ensemble with a set of slick heeled boots. The black pair featured rounded toes and thin stiletto heels, totaling at least 3-4 inches in height. Though the style’s material and height weren’t fully visible, it’s likely they featured a thigh or knee-high silhouette crafted from leather or suede — both of which Hilton has previously worn, and would have smoothly complemented the dark tones of her outfit’s wild print.

The “Paris in Love” star’s shoe wardrobe is wide-ranging. Hilton has worn a variety of pumps and sneakers by Steve Madden, Jimmy Choo and Giuseppe Zanotti over the years, frequently accented with maximalist crystals or mixed materials. Her footwear rotation also includes Alaia boots, Rothy’s flats and K-Swiss sneakers.

Hilton continues to build an empire with 19 product lines, including shoes, clothes, handbags, jewelry, lingerie, dog clothes and makeup, as well as media projects. “I’m about to release my 29th fragrance,” she told FN in an August cover story, listing off her current commitments. “I’m investing in a lot of tech products and VR and NFT and writing my third book and doing my second album. And I have my podcasting company, my deal with Warner Brothers, my own production company deal, and my new show.”

Click through the gallery to see Hilton’s glamorous style evolution over the years.