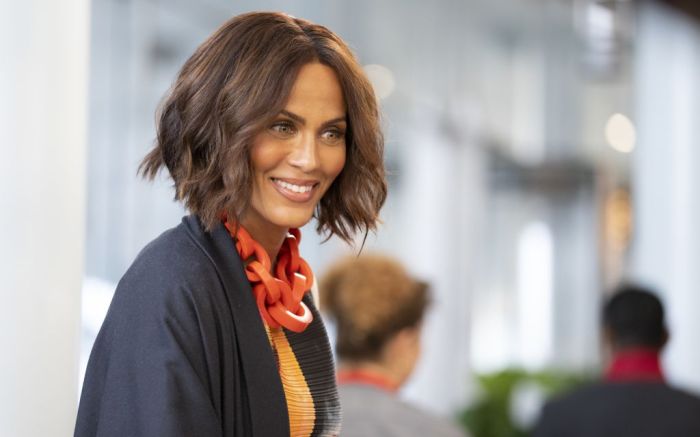 Nicole Ari Parker is stepping back into Lisa Todd Wexley’s shoes — this time, for a charitable cause. The “And Just Like That…” actress has partnered with the brand Rianna + Nina in a fashionable auction to benefit relief efforts in Ukraine as the country defends itself against military conflicts with Russia. The fashion and footwear industry (including Nike, Chanel and more), political leaders and the public have condemned Russia’s attacks and voiced support for Ukraine.

The actress walked in the flowing number for an Instagram video, showing the movement of the dramatic piece. Featuring a sharp collar and draped long sleeves, her dress featured a silky pink top with a long red, white, green and gold multi-printed skirt. The style was cinched with a thin waist tie.

Parker’s auction also includes a bracelet, inspired by the dress and also worn on the “Sex and the City” reboot. The piece appeared to feature a red, white and dark green crocheted texture, as well as sparkling accents shaped like a flower, heart and eye.

Paired with the dress was a set of silky slide sandals. Parker’s footwear featured flat soles with wide toe straps in a golden silk. The style was complete with red accents on both straps, complementing the dress.

The actress’ slides were remarkably similar to the wardrobe of “LTW” herself, which was colorful and eclectic throughout the show’s first season.

Parker’s shoe style is bold and eclectic, much like her “And Just Like That…” character Lisa Todd Wexley. The star’s red carpet ensembles often include metallic, colorful and sparkly open-toed pumps and sandals, hailing from brands like Gianvito Rossi, Tom Ford and SJP by Sarah Jessica Parker. As Wexley, Parker has also donned a range of statement shoes, including textured and bright boots and pumps by Saint Laurent, Moschino, Giuseppe Zanotti and numerous top brands. Her off-duty ensembles include boots from independent labels like A Plan Application and Stivali, as well as Tory Burch sandals and Off-White sneakers.