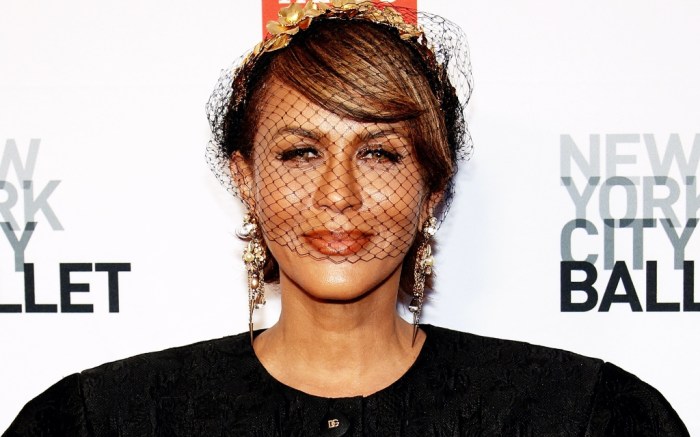 Lisa Todd Wexley is back! Nicole Ari Parker returned to Manhattan for “And Just Like That…” in full force this morning — with a statement-making outfit to match.

As Wesley, Parker was spotted on the Upper East Side — thanks to the show’s vigilant costume department’s Instagram page — in a dramatic Valentino ensemble. Her outfit featured a gauzy red Valentino gown with a low neckline and flowing cape train, revealed via Instagram to be a custom creation for the show. Completing Parker’s Molly Rogers and Danny Santiago-designed outfit was an extravagant matching feathered headpiece, featuring a black base where feathers protruded from around her head. The style was instantly reminiscent of Valentino’s similar headwear worn in Pierpaolo Piccioli’s runway shows, as well as Frances McDormand’s 2018 Met Gala ensemble.

Parker’s ensemble also included Herbert (Chris Jackson), dressed in a dapper black tuxedo and loafers. Though her outfit’s footwear was hidden beneath her gown’s long hem, it’s likely to have included matching pumps or stiletto-heeled sandals — as Parker has previously worn as Wexley in the past. The character’s Valentino ensemble was notably seen being pushed across the street near Park Avenue earlier this morning as well, furthering the dramatic nature of its size and fabrication.

“And Just Like That…” has returned to filming its second season in Manhattan as of early October, with several outfits from the new season already going viral. Sarah Jessica Parker has already been spotted outdoors in metallic pink stiletto sandals and Dior’s 2008 Extreme Gladiator sandals — complete with J.W. Anderson’s 3D-printed pigeon clutch. Kristin Davis was also seen filming in the rain with Parker at the start of October, dressed as Charlotte York Goldenblatt in a sheer blouse and black pumps. Though no additional outfits have been seen for Lisa Todd Wexley or other characters yet, the character’s Valentino ensemble was seen being pushed across the street near Park Avenue earlier this morning.