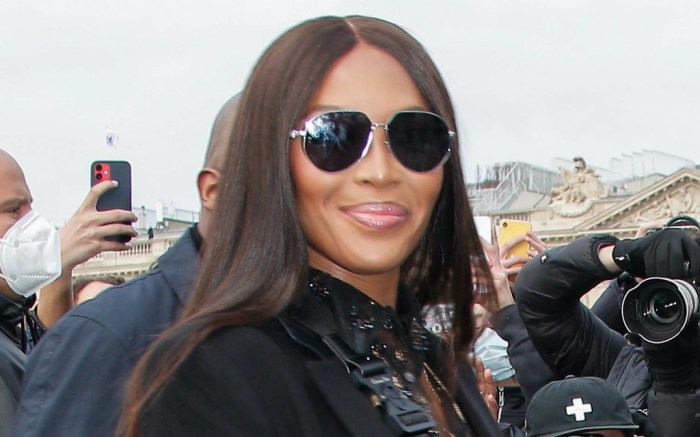 The iconic supermodel wears a range of ensembles in the campaign, ranging from a blue suit worn sans blouse to a silver tinsel-like coat. Campbell’s most daring ensemble, however, featured a plunging purple silk minidress. The long-sleeved number included a draped texture, as well as deep neckline with a crystal ornamental accent.

When it came to footwear, the Alaïa muse slipped on a daring pair of sky-high heels. Her style appeared to include black satin uppers, complete with thick platform soles. The pair also featured front straps and crossed buckled ankle straps to create a cutout silhouette. However, its boldest element was skinny block heels that totaled at least 5 inches in height, instantly elevating Campbell’s look from simply romantic to utterly glamorous.

Platform heels like Campbell’s have become a top fashion trend of the moment, with numerous pairs being released with thick platform soles and jaw-dropping heels ranging from 5-6 inches in height. Newer pairs by Versace, Tom Ford and Valentino have literally soared in popularity from their bold silhouettes, as well as trendy features like colorful satin and wrapped ankle straps. In addition to Campbell, stars like Addison Rae, Taeyeon and Anya Taylor-Joy have also worn daring platforms by Ego, Sugar Thrillz and Giuseppe Zanotti in recent weeks.

Campbell is one of the fashion industry’s most iconic supermodels, serving as a muse to legendary designers like Gianni Versace, Azzedine Alaïa and Vivienne Westwood over the years. Her shoe style is similarly eclectic, varying from dressy to casual. On the runways and red carpets, Campbell has worn footwear ranging from Westwood’s 9-inch reptilian heels to platform sandals and pumps by Versace, Alexander McQueen and Gucci. Off-duty, she’s still dedicated to glamour in platform and stiletto-heeled sandals and boots by Christian Louboutin and Alaïa. However, on more casual occasions, she can be spotted in Nike and Air Jordan sneakers.

Click through the gallery for Campbell’s iconic style moments over the years.