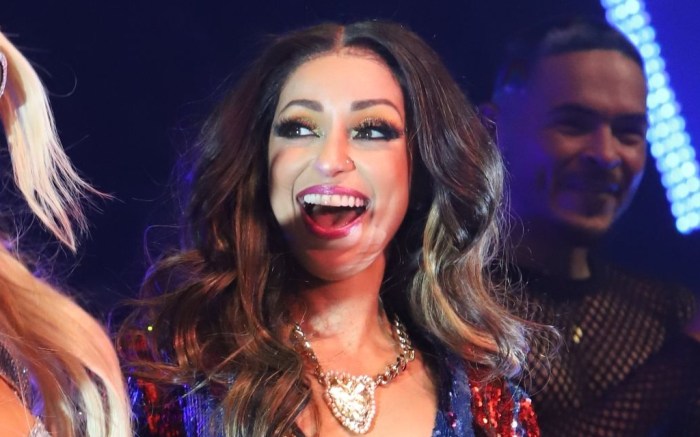 Mya returned to the stage this week while showing support for the LGBTQIA+ community at LA Pride. The singer made a surprise reunion with Christina Aguilera to perform their 2001 hit “Lady Marmalade.” Aguilera’s set also featured cameos from Kim Petras and was DJ’d by none other than Paris Hilton.

On Sunday, the “It’s All About Me” singer took the stage at Los Angeles State Historic Park in a vibrant yellow outfit to sing “Lady Marmalade” with Aguilera. Her punchy ensemble featured a halter-neck bodysuit with a keyhole neckline, lace paneling and crystal embroidery. Layered over the piece was a set of thigh-high leg covers attached with a metal ring, as well as matching lace gloves. Aguilera coordinated in a matching sheer yellow bodysuit with a crystal fringed bustier top, feathered accents and swirling embroidered sequins — plus a hairstyle exaggerated with glittering stripes, to her looks from her original “Moulin Rouge!” era.

However, this wasn’t Mya’s only bold ensemble of the night. Later in Aguilera’s set, the star re-emerged to continue performing — and dance alongside Hilton — in a printed sequined jumpsuit. The disco-worthy number featured a plunging neckline and jagged stripes in a palette of blue, purple, pink, silver and red. Completing the long-sleeved number was a chunky gold chain necklace with a large gleaming pendant.

Though the musician’s footwear wasn’t fully visible in her ensembles, it’s likely she wore a set of platform boots or sandals to perform onstage. The style was fully embraced by Hilton, who wore a set of sparkly silver ankle boots, as well as Aguilera — who performed multiple musical sets in various tall pairs of colorful boots.

When it comes to fashion, Mya often goes for bold. The musician regularly wears pointed-toe pumps on the red carpet ranging from neutral to metallic finishes — and occasionally featuring accents like allover studs — from multiple brands, including Christian Louboutin. She’s also been seen while off-duty in platform boots, as well as strappy and lace-up heeled sandals. When performing, the “My Love Is Like…Wo” singer can be seen in thigh-high boots featuring allover sequins, textures and cutouts as well.

Discover Aguilera’s boldest style moments over the years in the gallery.