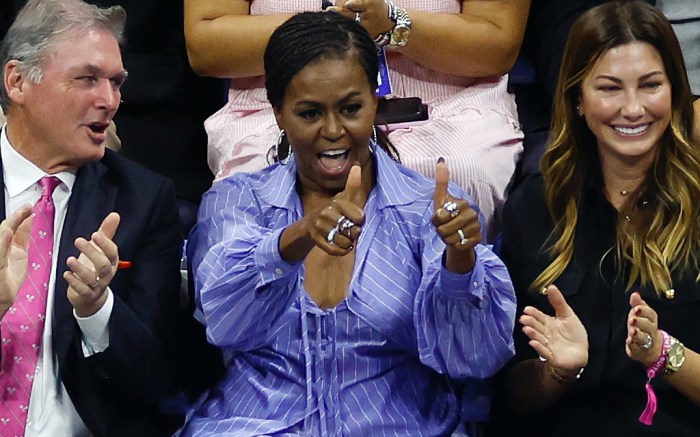 Michelle Obama revamped pinstripes in a chic new ensemble for the U.S. Open. The former First Lady was spotted in the stands for the occasion this weekend, attending the the Men’s Singles Semifinal match between Carloz Alcaraz and Frances Tiafoe.

While watching the match at the USTA Billie Jean King National Tennis Center on Friday, the “Becoming” author wore a blue blouse and matching pants. Each featured the same purple-tinted hue with a sharp white pinstriped pattern. However, the set went beyond simply matching; her trousers included a wide-leg fit, while Obama’s blouse featured a collared silhouette with rounded sleeves and a deep neckline with an upper tie. Together, the pieces created a monochrome look with subtle detailing that elevated them beyond a simple shirt and pants. Obama accessorized with round silver hoop earrings and layered rings to finish her outfit.

When it came to shoes, Obama’s footwear was not visible. However, it’s likely she paired her outfit with a set of sporty sneakers or sandals, as she’s previously done during more casual sporting events. Whatever her shoes may be, it’s clear the former University of Chicago student dean enjoyed the match — where she was also seated alongside USTA President Michael J. McNulty III and model Jill McCormick.