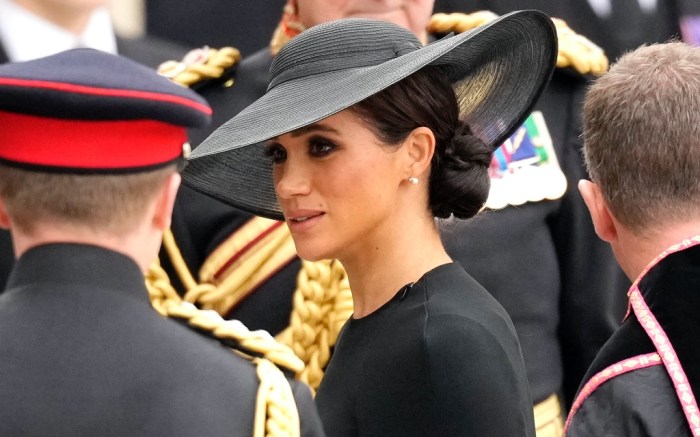 Meghan Markle has created yet another viral fashion moment — this time, for Paul Andrew, whose pumps she wore to Queen Elizabeth II‘s funeral.

The Duchess of Sussex wore the New York-based designer’s archival Pump-It Up style during the Lying-In State part of the occasion on Wednesday. Her pair — one of several that she owns, though the black set was confirmed to be a one-of-one colorway — featured suede uppers with pointed toes and thin heels. The versatile style was worn with a black cape-style dress and gloves, as well as a wide-brimmed hat, Loewe’s leather “Postal” top-handle bag, and a pair of pearl and diamond stud earrings — which Markle wore to her first joint event with the Queen in 2018, marking a new Cheshire bridge.

Andrew’s footwear — relaunched this February, following a brief hiatus during his tenure as creative director of Ferragamo — gained high interest when viewers spotted Markle’s soles sporting his overlapping “PA” logo. Though some speculated it was a traditional symbol of some kind, it was ultimately deduced that the monogram simply marked the shoes as Andrew’s design, according to Birmingham Live.

“We did not know in advance that Meghan had chosen to wear Paul’s shoes for this momentous yet sorrowful occasion,” a representative for the brand exclusively told FN. “Meghan owns that pump in a couple of different materials and colors, but we believe this is the first time she has worn the style in black suede.”

As for Andrew himself, the designer is humbled that Markle wore his footwear during this historic moment.

“It’s an honour that the Duchess of Sussex chose my shoes for such a momentous occasion,” Andrew exclusively told FN.

Now, the “Bench” author’s exclusive black suede set could become a revived hit for the brand, which — according to the representative — was specifically crafted for Markle. In fact, the same representative confirmed Andrew is already considering bringing back the Pump-It Up style to his repertoire in the Spring 2023 season, due to the international interest and desire for the shoe.

“It was an exclusive sku made especially for her,” the representative said, “but with the incredible global response to her wearing the pump this week we are considering to relaunch the shoe next season.”

Stay tuned for more updates as this story progresses.