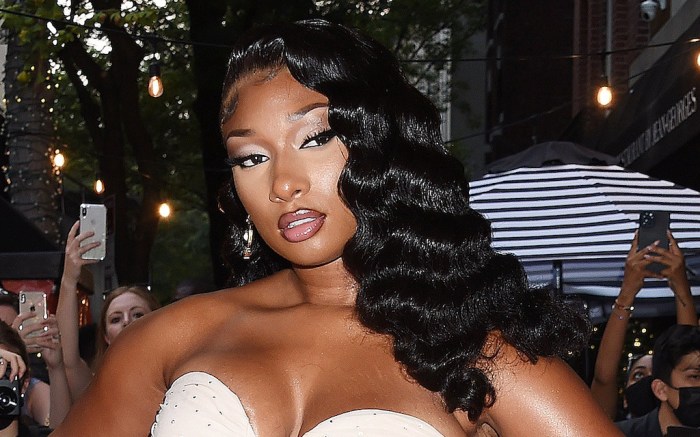 When it came to shoes, the “Something for Thee Hotties” musician strapped into a pair of black leather boots. The style featured rounded toes and a lace-up silhouette, complete with side buckles. The ankle-high pair was finished with ridged lug soles, giving Megan’s ensemble a distinctly casual and utilitarian vibe. Her look was also similar to the outfit she wore in Coach’s Spring 2022 campaign, alongside Jennifer Lopez and Noah Beck.

Lug-sole boots like Megan’s are a top trend year-round, able to be worn in both warm or cold weather. Popular styles include a lace-up or buckled silhouette for an edgy appearance, like newly released styles by See by Chloé, Manolo Blahnik and R13. In addition to the “Cognac Queen” singer, stars like Nicola Peltz, Kyle Richards and Lori Harvey have also worn Versace, Christian Louboutin and The Row boots in recent weeks.

For Megan Thee Stallion, the sky is the limit–literally—when it comes to shoes. The “Kitty Kat” singer often slips on over-the-knee boots featuring materials like latex, leather and crystals for a range of occasions. Many of the styles hail from Coach, which she’s been an ambassador for since 2019, though she’s also been spotted in pumps and strappy sandals by Louboutin, Sophia Webster and Jimmy Choo. In addition to the leather goods brand, the musician has appears in Calvin Klein and Savage X Fenty campaigns, as well as commercials and ads for Flamin’ Hot Cheetos, Popeyes and Tinder over the years.