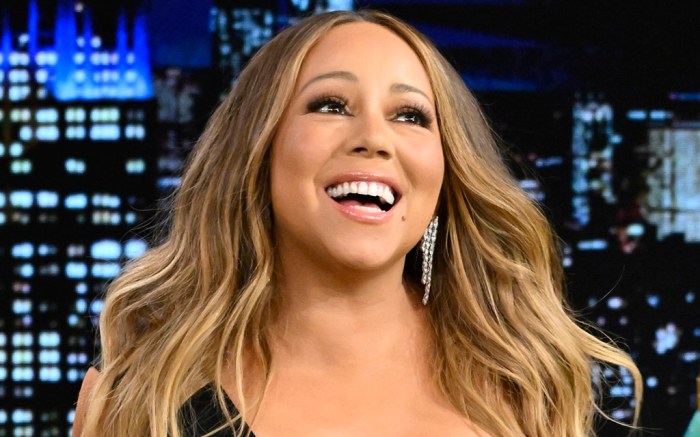 Mariah Carey is kicking off the holiday season on a decidedly royal note — by viewing Netflix’s “The Crown,” of course.

The period drama’s fifth season has premiered on the streaming platform — and, fittingly for the ’90s, its first episode features Carey’s 1991 song “Emotions.” For the royal occasion, the Grammy Award-winning musician held her own watch party with boyfriend Bryan Tanaka — as seen on Instagram.

Carey wore a white silk robe with a geometric yellow and blue swirl print. Beneath it was an especially bold choice of loungewear: a nude long-sleeved gown, covered in sparkling crystals. Her ensemble was complete with a glittering diamond pendant necklace, tiara, rings and drop earrings, amplifying the glam factor to the extreme.

When it comes to shoes, Carey’s penchant for glamour remains unmatched. The singer often opts to wear stiletto-heeled platform sandals and pumps on and off the red carpet from top brands, including Aquazzura, Sophia Webster, Christian Louboutin and Jimmy Choo. These often include statement-making elements like metallic tones, crystals and bright colors. Aside from her heels, Carey also favors Ugg boots while off-duty. The singer’s love for shoes runs deep, as she owns an extensive collection and launched her own namesake line with HSN in 2010.

PHOTOS: Discover Carey’s most high-wattage concert looks over the years in the gallery.

Sparkle like Mariah Carey in crystal sandals this season.